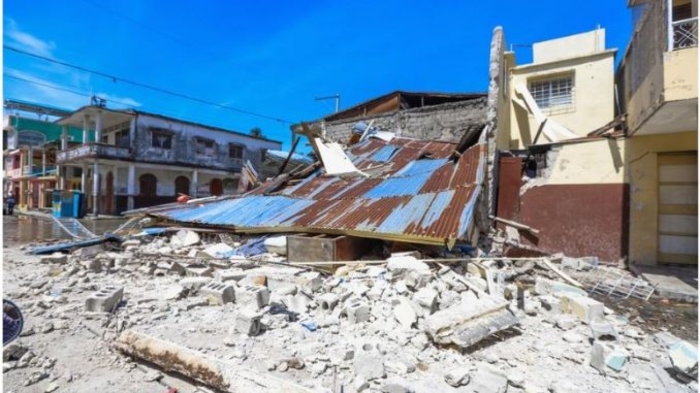 At least 304 people have died in the powerful 7.2-magnitude earthquake that struck southern Haiti on Saturday morning, the country’s civil protection agency tweeted.

Rescue teams and volunteers are working to pull people from the rubble of buildings, while survivors are being brought to hospitals.

The earthquake struck the impoverished Caribbean nation on Saturday morning, shaking the south-west of Haiti the hardest.

The scale of the devastation from the Saturday morning quake was still being assessed hours later, with the US Geological Survey (USGS) warning that there could be a high death toll.

Interim Prime Minister Ariel Henry described the situation in a Twitter post as “dramatic” and announced that the government would declare a state of emergency.

Among the dead was former senator Jean Gabriel Fortune, who was buried under the rubble of his hotel in the city of Le Cayes, according to Gazette Haiti.

A witness from Les Cayes, one of the largest cities in the country, told the Haiti Press Network of other collapsed houses and hotels, with people buried beneath the rubble.

Local media said hospitals in the hardest-hit zones were reporting being overwhelmed.

The USGS put the epicentre on Haiti’s Tiburon peninsula, about 125 kilometres west of the capital Port-au-Prince, and noted that many of the dwellings in the region are made of mud bricks and vulnerable to earthquake shaking.

The quake was also felt in the Dominican Republic, which shares the island of Hispaniola with Haiti, the Dominican newspaper Diario Libre reported. Jamaica, hundreds of kilometres away, was also reportedly rattled.

US President Joe Biden sent his deepest condolences to all those affected, while US Agency for International Development (USAID) chief Samantha Power said disaster experts were on the ground assessing damage and needs.

Annalisa Lombardo, the Haiti country director of Welthungerhilfe, one of the largest private aid organizations in Germany, told dpa she had received information of significant damage to buildings in Haiti. But she said Port-au-Prince, where she was staying, was largely unaffected.

Lombardo said her organization is now in contact with other relief agencies in the country to help ensure that those affected are provided with the essentials – water, food, shelter – in the first 24 hours.

“We are focusing on the people who have lost their homes,” she said, adding that gangs and Haiti’s poor infrastructure made aid delivery difficult.

Haiti, considered the poorest country in the Western Hemisphere, is still living with the impact of the January 12, 2010 magnitude-7.0 earthquake that left some 220,000 people dead and 1 million people homeless. Damage from the quake, which struck near densely populated Port-au-Prince, was estimated at 8 billion dollars.

The USGS said Saturday’s tremor, which also triggered smaller aftershocks, likely took place within the same tectonic fault system as the one that hit more than a decade ago.

Bocchit Edmond, Haiti’s ambassador to the US, posted on Twitter: “The January 12 of 2010 feelings are back to hunt us. Natural disaster continues to assault Haiti. Let’s bring our solidarity to our brothers and sisters in the great south.”

The quake comes as the country braces for the arrival of Tropical Storm Grace early next week.

The US National Oceanic and Atmospheric Administration forecast Haiti could be impacted by heavy wind and rainfall on Monday and Tuesday, although it was still possible Haiti could be spared the worst Grace has to offer.

Haiti has also been in political turmoil since the assassination of President Jovenel Moise in July. He was shot dead in a middle-of-the-night attack at his residence by a heavily armed commando force.