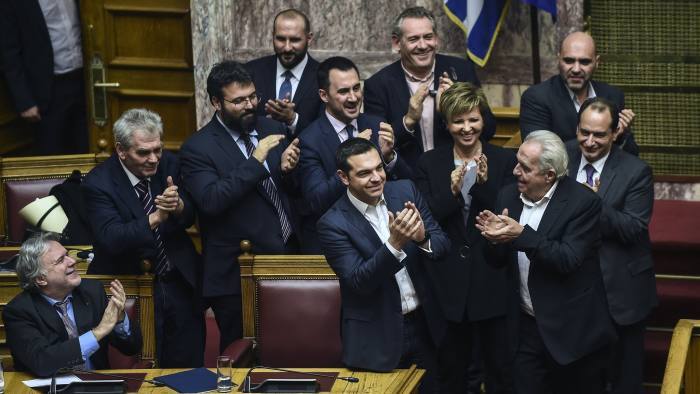 The note verbale informing Greece that the domestic processes related to the terms of the Prespes Agreement completed by Macedonia reached Athens on Wednesday evening, diplomatic sources told the Athens-Macedonian News Agency.

During his address – the last speech before the roll-call vote – Tsipras said that Macedonia’s note verbale informing Greece that it had completed the terms of the Prespa Agreement just reached Athens, and told Mitsotakis there will be plenty of time to discuss it. He also challenged him to a TV channel of his choice. The note verbale, he said, will clarify certain things in the most explicit and unquestionable way. “What do our neighbours clarify in this document, which is legally binding and repeats the terms of the Agreement?” Tsipras asked. “First, that the term ‘nationality’ refers exclusively to citizenship and neither declares nor presupposes the issue of ethnicity,” he continued. “Second, that the language of our neighbours, as referred to in the Agreement and recognized by the UN conference of 1977 belongs to the group of south Slavic languages.” “So what do we have here, Mr. Mitsotakis? The full and complete deconstruction of the excuses you discovered in order to hide from the historical obligation allotted to you and your party,” Tsipras concluded.