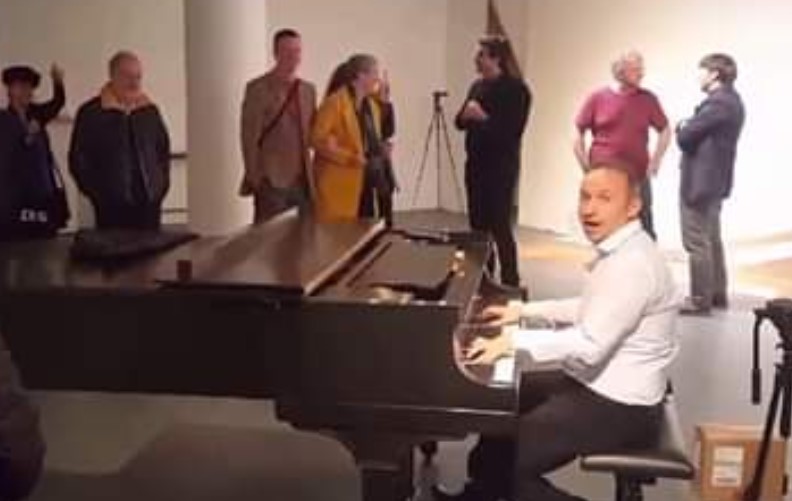 Macedonia’s greatest pianist Simon Trpceski responded to his critics with a video greeting from New York. Trpceski was dragged over the coals by SDSM party supporters online after he complained that he had to cut short a concert in Stip because the venue was not heated.
Trpceski apologized to the audience of behalf of the organizers, and decried the poor state of the venue, the burnt out light bulbs, the lack of toilet paper in the restrooms, the cold..

I’m not trying to be a stand up comic here, the people of Stip love these events that happen once each year, and it’s great to be here. I’m just curious if the Mayor is here, or the directors of the public institutions, Trpceski said during the concert.

This was not received well by supporters of the SDSM party, who took maestro’s criticism personally and as an indictment of their party. Some of the loudest SDSM fans online began accusing Trpceski of being a supporter of the opposition VMRO-DPMNE party and his alleged lack of similar criticism during the VMRO reign (VMRO invested heavily in building and refurbishing cultural centers). Given the pre-election period, and how politics are conducted through the cultural sphere, the left believed it must respond to Trpceski’s observations of their mismanagement.

Trpceski is not particularly politically active. Recently he did perform in the Uzbek capital of Tashkent, and dedicated the concert to the plight of the Macedonians expelled from Greece. This is a thorny issue for the Macedonian left, given the refusal of the Communist party to accept the refugees and their internment across other Communist countries, including in the USSR, where camps were set up in Tashkent. Nikola Vlahov, Trpceski’s piano teacher, was one of the expelled Aegean Macedonians who was deported to Tashkent.

Either way, the response to the criticism from the left came quickly. Trpceski attended the opening of an exhibition of works by sculptor Slavco Spirovski in the Macedonian cultural center in New York. Attendees shared a video of him taking to the piano and performing “A Great Love”, a song from Dimitar Masevski, composed at the time of Macedonia’s independence referendum from Yugoslavia. The iconic refrain goes: “for many more years Macedonians, wherever you may be, for many more years my people, for Macedonia” and is an inevitable part of any patriotic gathering. Again, not an overtly political statement from the artist, who has consistently been above petty politics, but given how the very use of the name “Macedonia” has become an act of defiance under the SDSM regime, the message was clear.

VMRO: Because of Zaev’s corruption, Macedonia lost 14 million EUR already approved by EBRD for reconstruction of the Stip hospital