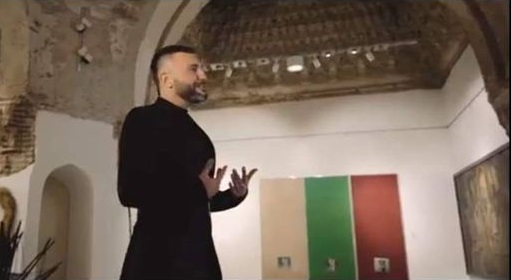 The dispute with Bulgaria has so preoccupied public discourse that it has now bizarelly entered into the Eurovision competition.

The reason is the recently promoted video for the Macedonian entry – the song named Here I Stand performed by Vasil Garvanliev.

In the video, recorded in a historic art gallery in Skopje, an art piece is seen at the wall depicting three stripes in white, green and red – which is the Bulgarian national flag. After a screenshot from the video was shared online and Garvanliev was asked whether it was done on purpose, the gallery revealed that it is in fact an art piece by Zaneta Vangeli. But the original piece has the stripes in a different order – white, red and green, which is now prompting a new round of online sleuthing and analyzing over whether the art piece was mistakenly displayed for a longer period of time, or just for the Eurovision video.

The kitchy contest often takes on political connotations, especially in the Balkans, and mainy around the distribution of points between various countries. During the last pre-covid competition, in 2019, competitor Tamara Todevska scored a solid 7th place, but went out of her way to use the imposed name “North Macedonia”, for which she was scorned at home. Shortly after, she mangled the Macedonian national anthem during the 4th of July reception at the US Embassy, for which she had to formally apologize, and even tattooed the correct lyrics in an attempt to win back the public.

After announcing he will remove the Bulgarian flag from his video, Macedonia’s Eurovision contestant Garvanliev confirms he also has Bulgarian citizenship