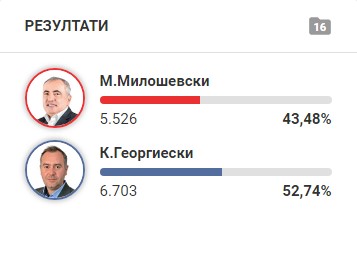 The preliminary unofficial results from the early elections for mayor of Ohrid point to the victory of the candidate of the SDSM-led coalition, Konstantin Georgieski.

According to the processed 90 percent of the votes, or 29,000 votes, Georgieski has an overwhelming lead of almost 4,000 votes ahead of the candidate of VMRO-DPMNE, Mitre Miloshevski.

SDSM’s election headquarters in Ohrid is already celebrating since the current difference in votes indicates a certain victory in the mayoral election.