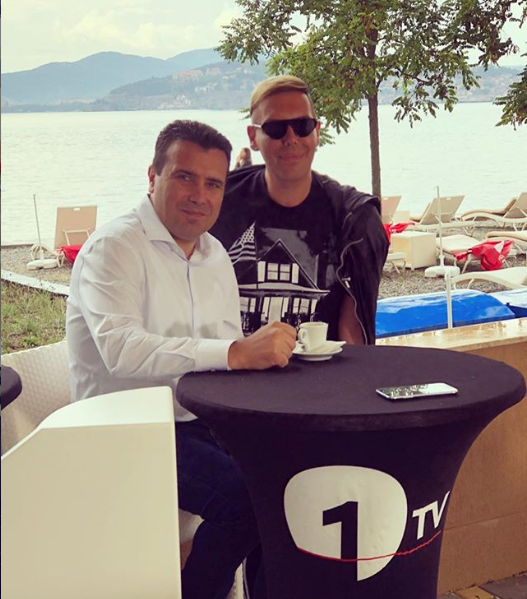 The audio recording that was revealed in Parliament yesterday makes it clear that Zoran Zaev knew about Bojan Jovanovski – Boki 13′ extortion, says one of the leaders of Zaev’s 2015 Colored Revolution. Law professor and activist Dimitar Apasiev points out to the segment of the recording in which Zaev discusses how Boki 13 funds his TV station, and says that the money came from businessman Siljan Micevski, who was target of extortion.

Zoran Zaev knew all along about the retirement homes scheme prepared by Boki’s NGO organization. This case led to criminal charges against Deputy Parliament Speaker Frosina Remenski. Zaev also says he helped Boki on several occasions, Apasiev said after the tape was made public.

The scheme was pushed by Boki 13’s NGO group named the International Association, which was shopping across Macedonia for desirable, publicly owned land which Boki would develop using his links to the ruling SDSM party. The locations included Ohrid, Bitola and Skopje’s Karpos district, and according to the plan, the International Association would claim state subsidies to build retirement homes. Micevski himself said that after a while, the retirement homes would be turned into commercial real-estate and sold off.

As Boki 13’s “charity” defends its actions, calls are made to investigate where did the money go

It’s not fully clear whether Micevski was a target of extortion, like other businessmen, was angling to get in on a lucrative real-estate deal or a combination of both. He paid more than 700.000 EUR to Boki 13, while another construction company from Struga paid 230.000 EUR. People who joined Boki 13 in the International Association, most prominent among them the Deputy Parliament Speaker Frosina Remenski, are currently charged over the case.

In the tape that was revealed by VMRO-DPMNE member of Parliament Antonio Milososki, Zoran Zaev is heard discussing Boki 13’s finances and saying that he got his money from a Croatian businessman and from “Cile” – which is Siljan Micevski’s nickname. This proves that Zaev was, at the very least, informed about the one of the criminal activities by Boki 13.