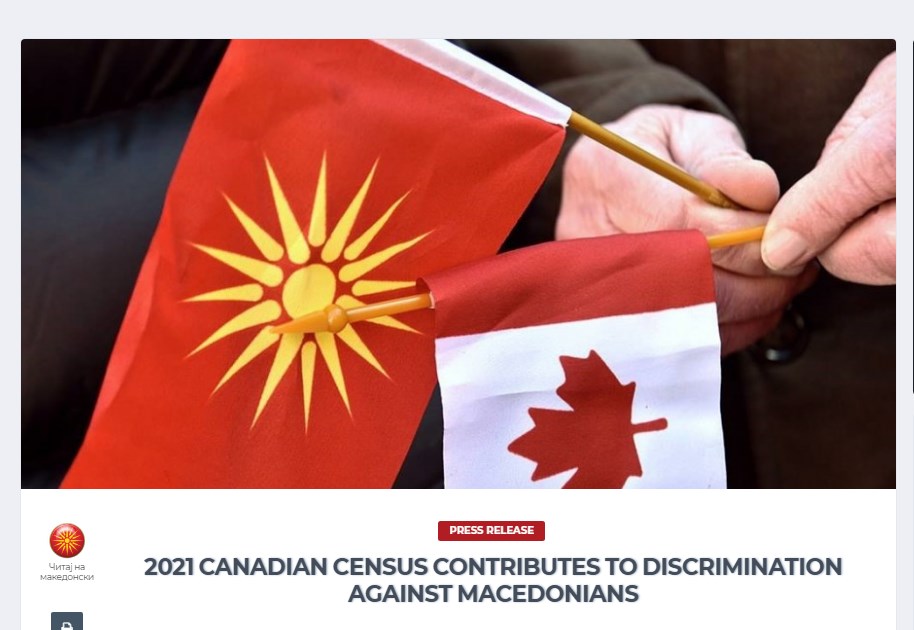 Canada is declaring Macedonia as a Greek region in its on-going online census. Macedonians in Canada, who are trying to register in the census, are stumped by the question asking them about their possible other citizenship. An attempt to enter “Macedonia” leads to a response declaring Macedonia a region in Greece. The other option is the imposed name of “Republic of North Macedonia”.

Please specify country according to present boundaries in question 21 b. For example, instead of Macedonia, please report Republic of North Macedonia (part of former Yugoslavia) or Greece (Macedonia region), the message states.

This grants Greece the pure form of the name Macedonia, while the large Macedonian community in Canada is forced to use the imposed name.

The Macedonian Human Rights Movement International, which is based in Canada, calls on Macedonian Canadians to react to this abuse and to respond using the form available at the website. MHRMI cites this as yet another example of discrimination against Macedonians, as part of the Canadian Government’s policy of supporting the imposed name change.

The organization calls on Macedonian Canadians to insert Republic of Macedonia in response to this question, as it remains unchanged in the form. It also calls on them to use Macedonian as ethnic identity and language that is spoken and Macedonian Orthodox in the form for religion.

The large Macedonian community in Canada roundly rejects the imposed name change and frequently helps political prisoners of the Zaev regime and other causes in Macedonia.