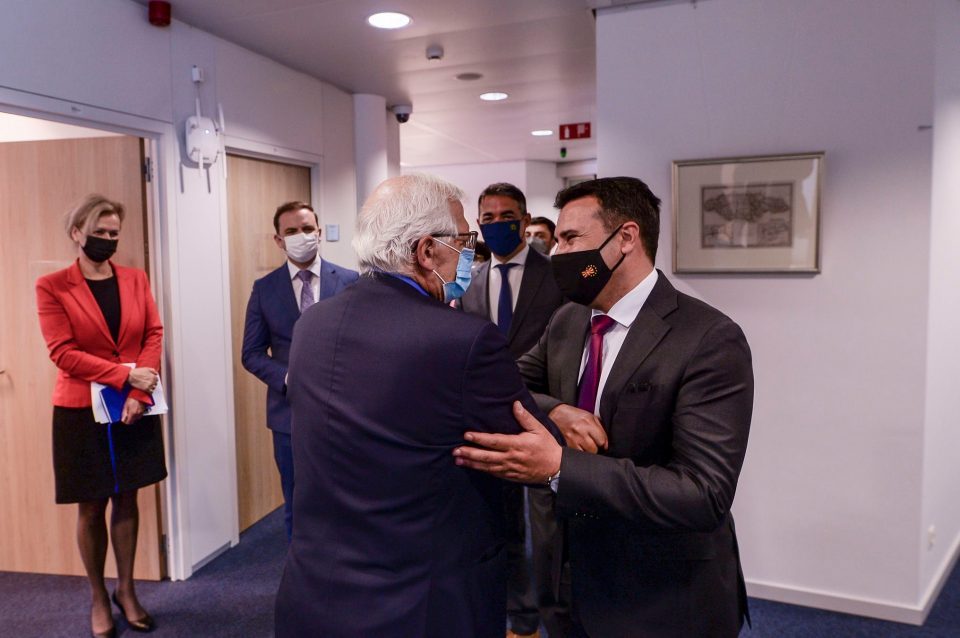 Prime Minister Zoran Zaev issued a video statement to the public after his visit to Brussels, declaring that he informed EU officials that he will not negotiate on the Macedonian name and identity. The statement comes as the European Council is considering allowing Albania to decouple from Macedonia and open accession talks alone, while Macedonia remains blocked by Bulgaria and its claims on the Macedonian national identity and history.

Respected citizens, this week is spent in an intense EU agenda between Skopje, Brussels, Madrid and Athens. I speak to you from the mission of (North) Macedonia here, in the heart of the European Union, in Brussels. We had intense meetings with the top representatives of the European institutions. We ensured that the key representatives in the European Commission, the European Parliament and all other European institutions know and understand that our Macedonian identity is non-negotiable, and will never be negotiable, Zaev said after his meetings with Von der Leyen, Sassoli, Varhelyi, Timmermans and other EU officials.

Bulgaria wants Macedonia to acknowledge the Bulgarian origin of its language and national identity, and to rewrite its history – in line with the treaty Zaev signed with Borisov in 2017. Zaev promised to deliver early this year, then failed to do so after street protests organized by opposition VMRO-DPMNE party and a fracture in his own party, and Bulgaria vetoed the opening of accession talks. Bulgaria now has no Government as it heads to early elections and is unlikely to revoke its decision, while Albania seems on the verge of opening the accession talks alone. Zaev insisted that “we must move forward and together”, indicating that he was pushing against the option to decouple Albania from Macedonia in Brussels – something that won’t sit well with his crucial Albanian coalition partners or with Albanian Prime Minister Edi Rama, who helped Zaev grab power in 2017.

In the meantime, Zaev’s media allies in Macedonia and the region have been working on spreading a conspiracy theory that the incoming Slovenian presidency, led by conservative Prime Minister Janez Jansa, will try to initiate a redrawing of Balkan borders, including those of Macedonia. Zaev party officials have blamed Commissioner Oliver Varhelyi, nominated by the Hungarian ruling right wing Fidesz party, of proposing to advance Albania as part of this plan to cause disruptions in the Balkans. This despite the fact that numerous Enlargement Commissioners in the past have worked to move countries forward and have proposed to advance Croatia, Serbia, Montenegro, even as Macedonia, which was considered part of a group with them, was blocked by Greece.

Zaev insisted that the Prespa Treaty in 2018, where he made enormous concessions to Greece in terms of Macedonian national identity and history, and his 2017 treaty with Borisov, resolved all open issues and ensured support for Macedonia’s European integration. While it did get Bulgaria and Greece to Macedonia to join NATO, under the imposed name of “North Macedonia”, it only opened a new round of demands from Bulgaria, which sees Zaev as ready to compromise and accept nationalist positions from EU member states in the region.