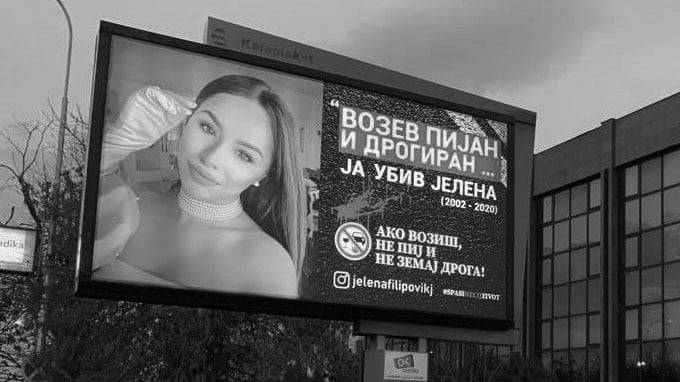 Prosecutors in Kumanovo filed charges against the father of the young Jelena Filipovic, who was killed in a traffic accident a year ago. The father is charged with trying to get two people who owed him money to kill the driver and others associated with the accident.

The 17 year old girl was killed when the car she was in, driven near Skopje by Nikola Stefanovski, slid off the road. Stefanovski admitted guilt and faces four years in prison, but the Filipovic family demanded that he is given a higher sentence, and booked a billboard in front of the Skopje courthouse, with the face of their daughter, and the text “I drove drunk and under drugs and I killed Jelena”.

The tragedy took another macabre twist when someone dug up Jelena’s grave. Police charged three graverobbers, but the Filipovic family claims that this was done by the Stefanovski’s family.

Her father is now suspected of trying to get two men, who owed him 80,000 EUR, to kill Nikola Stefnaovski, his father and even another girl who was also in the car and was injured in the accident. According to the charges, Jelena’s father offered to add additional 40,000 EUR to the debt, but the men refused to carry out the murders and reported to the police that they are being threatened and pressured to carry out contract killings.