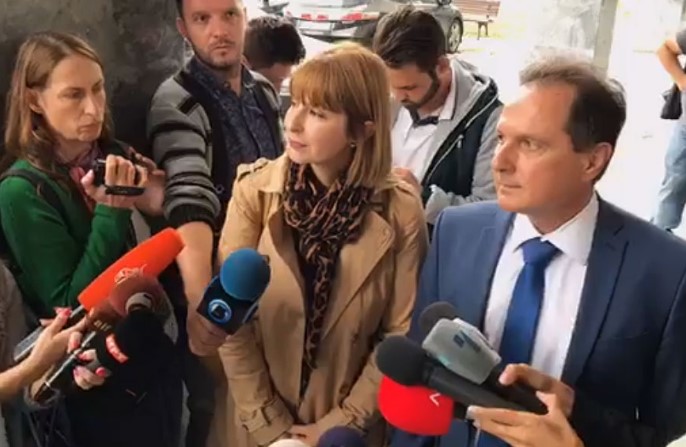 Irena Frckoska, the lawyer defending disgraced former Special Prosecutor Katica Janeva, asked the public for understanding following today’s profane outburst from Janeva. Janeva shouted at her former deputy Lile Stefanova, who testified against her in the trial where Janeva is accused of extorting 1.5 million EUR from a businessman.

After Stefanova detailed Janeva’s abuse of office, and laid all the blame on Janeva’s shoulders, she was rewarded with comments such as “whore” from the former Special Prosecutor.

I don’t agree with what was said, but Katica Janeva is deeply outraged with everything that is happening to her. We all heard that Stefanova said one thing in January and now says something different. The facts are being twisted, Frckoska said.

The lawyer, who is the wife of notorious former Interior Minister during some of the most crime ridden years of Macedonian independence Ljubomir Frckoski, insisted that Stefanova’s testimony proves that she, and not Janeva, had the main say in the prosecuting of the cases assigned to her. Frckoska also expressed satisfaction with Stefanova’s comment that a total of five people were released from detention and not just the businessman Jordan Orce Kamcev, who was the main target of extortion.

Stefanova said that a number of officials from the VMRO-DPMNE party, which was the main target of the SPO, were released from detention into house arrest along with Kamcev. This included the former security chief Saso Mijalkov. The timing of the releases corresponds with the maximum pressure on the members of Parliament to vote in favor of the imposed name “North Macedonia”. Some of the former VMRO-DPMNE representatives were overtly blackmailed, with criminal charges filed against them by both Janeva and prosecutor Vilma Ruskoska, to vote in favor of the “new name”. Stefanova’s testimony was seen as evidence that the Special Prosecutor’s Office was deeply politicized and targetted its work to produce the maximum political effect in favor of the ruling SDSM party.