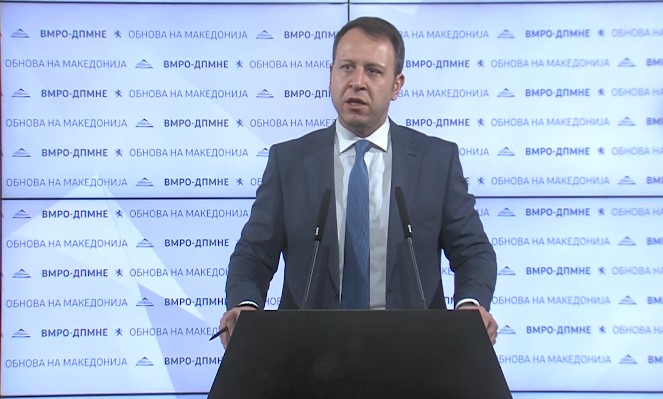 VMRO-DPMNE Secretary General Igor Janusev accused Zoran Zaev and his SDSM party of allowing dozens of new marijuana plantations to open across Macedonia, and of allowing the growers to sell dried marijuana buds on the black market, instead of using the plants for cannabis oil extraction.

In just two days in December, and days before Zaev resigned as Prime Minister, 10 new licences were given to marijuana growers. There were a total of 31 licences givein 2019. Compare this to just five between 2016 and 2018. Twenty more applications are awaiting approval. Most of these companies are applying in violation of the laws, and are asking to be allowed to sell dried marijuana buds. The law only allows growing of marijuana for oil extraction. It is widely rumored that the price to receive one such licence is between 300 and 500 thousand euros, paid directly to people close to the Government, Janusev said during his press conference today.

Janusev announced additional details about Zaev’s involvement in the marijuana business in the coming days. Zaev’s family is heavily involved in the growing of marijuana, using its proximity to power to grant licences to itself, and meanwhile Zaev’s SDSM party is pushing for legal changes that would allow exporting of marijuana buds, or dried flowers.

When we adopted the law legalizing marijuana growing for cannabis oil in 2016, it was done under strict conditions and criteria, that the oil will be used for medicinal purposes, and not for turning Macedonia into a marijuana oasis. SDSM and Zaev allowed a hyper-production of new licences, most of which are given to people close to SDSM. We are informed that the Healthcare Ministry is not conducting the mandatory inspections in these plants and that huge quantities of marijuana is sold on the black market, turning Macedonia into an extension of Lazarat, said Janusev, referring to the Albanian region that is notorious for marijuana production.

Zaev was pushing for the changes to the drug law in October, at a time when Macedonia was focused on the European Council and the hoped for date to open its EU accession talks. The push to amend the drug law at a time like that, using the “European flag” procedure which allows fast-tracking a law through Parliament, raised eyebrows. Janusev now says that the reason is that Zaev promised fellow businessmen that he will allow them to sell marijuana buds legally, but still hasn’t kept his promise.

These businessmen are now asked to pay more, to support the SDSM electoral campaign, so the party can stay in power and finish the job, Janusev said.

Janusev: SDSM already controls the judiciary, what are they marching for?

Zaev only knows how to close factories, Janusev says, after an iconic textile mill in Tetovo goes under