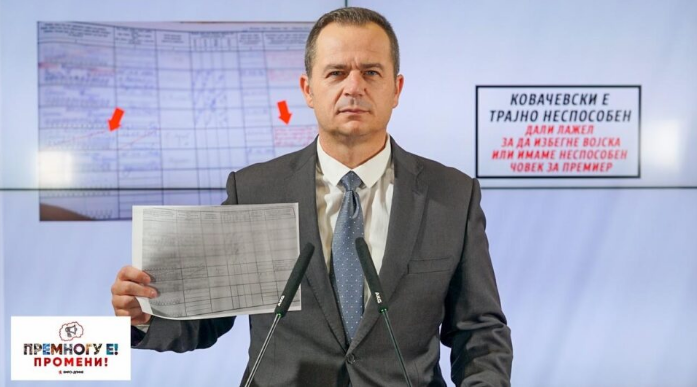 Dimitar Kovacevski, Prime Minister of Macedonia, avoided military service, justifying himself with a medical opinion that he is PERMANENTLY INCAPACITATED for military service, accused Dragan Kovacki from VMRO DPMNE, at today’s press conference.

This is the document, an excerpt from the Army record book, published on social media. 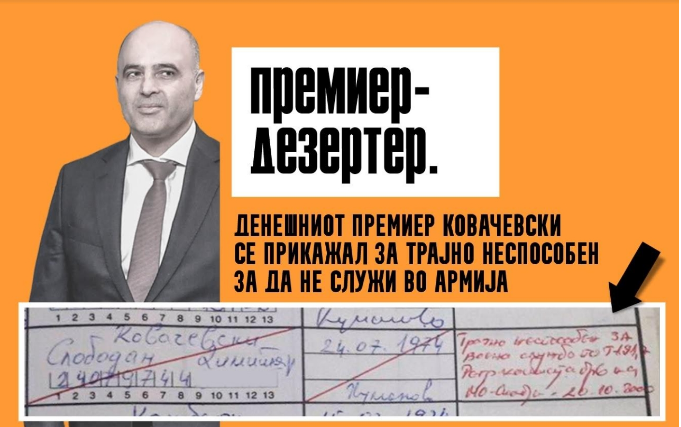 From this document, it is clearly seen that Kovacevski was declared PERMANENTLY INCAPACITATED by the doctors.

This leads to two conclusions. Either Kovacevski abused the influence of his father, who was then the Mayor of Kumanovo and a party official of the SDS, and received a false medical opinion, or he really is PERMANENTLY INCAPACITATED.

If Kovacevski did not lie and did not use fraud, then we have a PERMANENTLY INCAPABLE man as the Prime Minister of the country, and the diagnosis itself says that his incapacity cannot be removed, that his condition is permanent, which means that it can only get worse.

If Kovacevski lied about his health situation, then we have a pathological liar at the head of the state.

If Kovacevski really is PERMANENTLY INCAPACITATED, we don’t know if that condition has progressed and if he is fully functional to perform the state tasks.

In both cases, that is, if he lied, and if he is PERMANENTLY INCAPACITATED, Kovacevski as prime minister is a danger to the state.

Kovacevski must resign. Macedonia must not be led by a prime minister who is either a pathological liar or is PERMANENTLY INCAPABLE, Kovacki said.