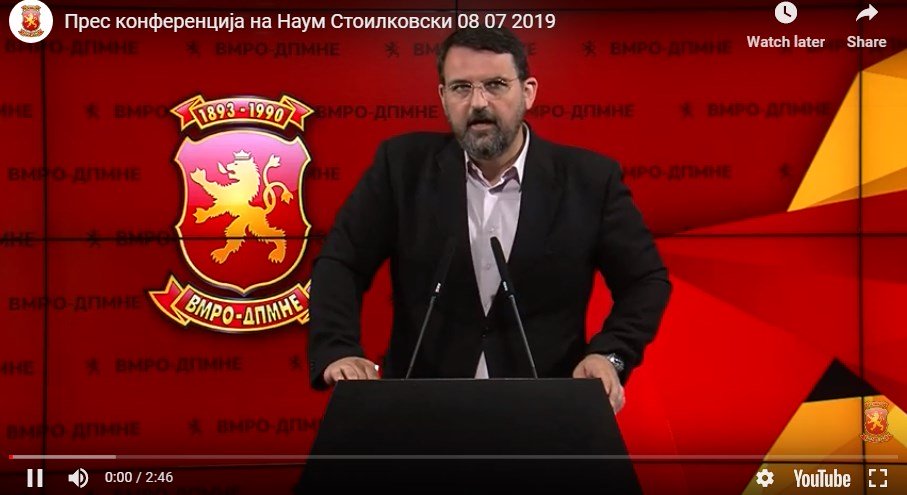 The arbitrariness of the authorities and the abuse of office and the money of the citizens through the accumulation of positions, ie the illegal performance of multiple elected or appointed positions by the same persons do not stop, Naum Stoilkovski from VMRO-DPMNE said at Monday’s press conference.

Tasko Dojcinov was elected President of the Council of the Municipality of Gevgelija, he chairs the Council of this municipality from October 2017, and from October 2018, a year later while serving as an official in Gevgelija, the Macedonian Parliament also appointed him as a member of the State Commission for decision-making in administrative procedure and procedure of employment in the second instance. It is about an accumulation of two positions, one is elected, and the second one is appointed, which is contrary to the law, and lasts for a long time, Dojcinov enjoys the benefits of both positions. Unfortunately, although the topic existed in the public, the Anti-Corruption Commission did not react. And Dojcinov also did not react, who is aware that pursuant to Article 44 of the Law on Prevention of Corruption he could not be appointed to a second position. It assumes his intentions that in the period from October last year until May this year he illegally acquired about 900,000 denars. These at least 900,000 denars by May are the money that he received on the basis of the gross salary, but also the rent for an apartment and costs in Skopje. Thus, there are conditions for criminal responsibility and the possibility of returning the money to the state budget, says Stoilkovski.

He adds that because the Anti-Corruption Commission did not act upon receipt of information, it now has a complaint from VMRO-DPMNE asking us to determine the illegal accumulation of the positions and to immediately withdraw the member of the second instance Commission for decision making in the administrative procedure. But we also demand all the money that he received while illegally performing two positions, 900,000 denars are only by May, and still, so, Tasko Dojcinov to returned them to the Budget, he added.

Macedonia sinks in poverty, and instead of realization of capital investments and economic progress, Zoran Zaev’s associates are fighting for multiple positions. But if the prime minister can simultaneously nominate himself for a minister, then what should be expected of the other elected officials, except to be appointed to different commissions and steering boards. Carcinogenicity and disrespect for the law are the basis of the gang in power, and this situation can only be changed with the fall of the government, Stoilkovski concluded.