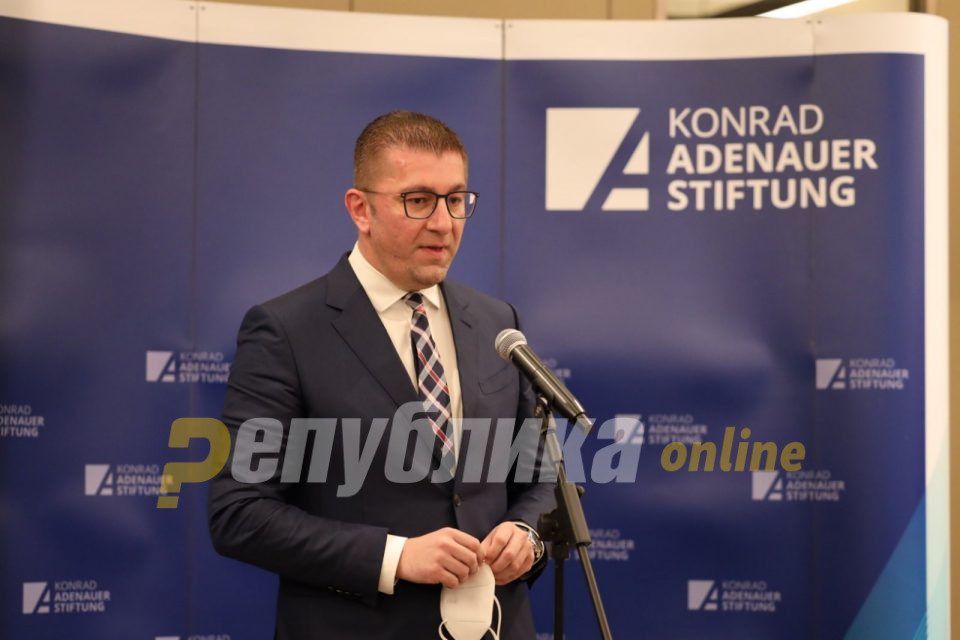 The Renewal of Macedonia Coalition opposes the changes to the Constitution and demands recognition of the Macedonian minority, respect for the Macedonian history and its uniqueness. The Coalition also urges Bulgaria not to block the European future of the country, but to support it and show real friendship between the citizens of the two countries.

He also called for a meeting with all opposition parties in Parliament, all parties that care about the state’s well-being, to try to talk and find a solution.

According to the Coalition, the Macedonian language and its historical roots and anthropology as well as its recognition are an incomparable historical fact that has been confirmed and recognized by the entire world scientific community and that this fact is not up for discussion.

The Coalition, as Mickoski pointed out, insists on the recognition and respect of the Macedonian minority and its European guaranteed rights, which, according to him, exists in Bulgaria, and whose existence has been confirmed by competent European legal institutions such as the Court of Human Rights in Strasbourg.

We call on Bulgaria to respect the decisions made by this Court, which refer to the rights of the Macedonian minority in Bulgaria. The coalition calls for respect for Macedonian history and its uniqueness, and opposes the artificial change in the role and character of national heroes who fought for a free and independent Macedonian state, Mickoski said.

As he pointed out, the Coalition emphasizes that the Macedonian identity is indisputable and separate, it has its own special historical, legal, political and cultural development. This position, adds Mickoski, is unanimously joined by members of the Coalition parties representing ethnic communities that are different from the Macedonian people.

It was emphasized at the meeting that VMRO-DPMNE as the successor of the historic VMRO has a historical responsibility and obligation to protect, preserve and promote all identity traits of the Macedonian people and to fight for our common European future.

All other parties from the “Renewal of Macedonia” Coalition, as Mickoski said, endorse this position.