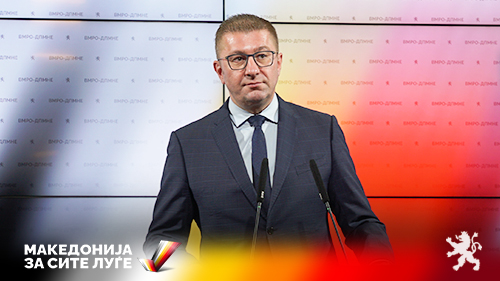 The Government was making calls in the negotiations with Greece all by itself, without involving the opposition or others from our society, and now it is doing the same with Bulgaria, said VMRO-DPMNE President Hristijan Mickoski. Mickoski today presented a resolution that calls for building national unity over the red lines with Bulgaria, in order to avoid having Macedonian national interests completely overturned during the EU accession process. Bulgaria demands rewriting of Macedonian history and redefining the Macedonian national identity and language to fit its historic narrative, and the Zaev regime seems prepared to accept it all.

This Government should have learnt by now from its past mistakes, which are costing us dearly, it should have learnt that we need a national and state consensus on the key national issues. How did we even get to this dispute with Bulgaria? It came out of the retail market diplomacy that Zoran Zaev and Nikola Dimitrov engaged in. They do not understand the relationships of states in the Balkans and did not foresee the consequences of their actions. They are prepared to pay the highest price so long as the bill is collected by someone else, by our country, while they keep their private privileges, Mickoski said.

Mickoski noted that the Government did not clearly outline the red lines it will not cross in the future talks with Bulgaria, and said that it is top priority for Macedonia to do so now. Bulgaria outlined its demands in a declaration that its Parliament adopted unanimously in late 2019.

– Our resolution will be binding and would guide the Government in what it can and what it can not talk about. The resolution follows the publicly declared positions of the Macedonian Academy of Arts and Sciences, the Ss. Cyril and Methodius University and the Macedonian Orthodox Church – this document is not authored by VMRO-DPMNE but is defined by the top scientific authorities in our state, Mickoski said.

The resolution calls for the following:

– That the negotiations are led on a basis of equality and on principles, with due respect for international law, without conditioning between the sides, and with full respect of the dignity of the Macedonian nation;

According to the resolution, there should be full respect for the findings, established facts, accepted theories and empirical studies by contemporary international Slavicists, linguists, historians and experts in international law, who indicate that:

– The Macedonian language and its dialects have continuity in this space and in time;

– The Macedonian identity derives its legitimacy fro centuries of traditions, customs, collective memory, mentality, language, articulated consciousness about its ethnic and cultural uniqueness, collective integrity, respect for traditional religious institutions, and the narrative of belonging to a certain geographic and historic space;

– That the shared areas of memory between the Balkan and Mediterranean nations are approached inclusively, and not with exclusive claims of history and tradition, and that they continue to be approached with full intellectual liberty, and not from a position of historic stereotypes and illusions of cultural and historic hegemony;

The resolution calls for continuing the EU accession process:

– In the spirit of mutual respect and valuing the efforts our side has put in meeting the required criteria;

– Relying on the positive and generally accepted international conventions and declarations of the United Nations that protect the right to self-determination and human rights and liberties;

– With full respect for the freely expressed will of the Macedonian people, and of its ethnic and spiritual uniqueness.