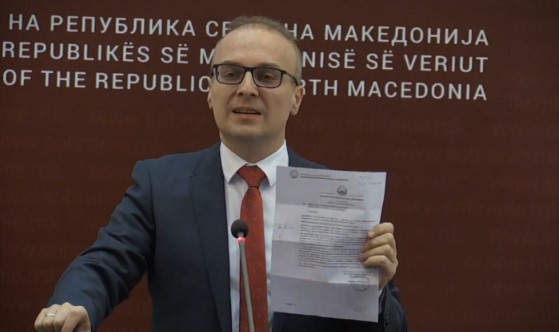 VMRO-DPMNE member of Parliament Antonio Milososki, who published an audio recording yesterday to reveal how Zoran Zaev was the main decision maker in the Supreme Court in major corruption cases, today clarified where and how the recording was made.

Zaev yesterday confirmed the authenticity of the tape, which had portions of the conversation clearly cut out, and said that it was probably recorded by a member of Parliament. He said that he suspects the so-called “Gang of eight” former VMRO-DPMNE members of Parliament who were pressrued with criminal charges or bribed with lucrative public contracts into switching to Zaev’s side and voting in favor of the imposed name change and later, ironically, Zaev’s law on state prosecutors that would ban the use of such wiretaps as evidence.

But Milososki today said that the recording was made in the Government building, in May 2019, while Zaev was meeting with a person linked to the Racket trial.

In the transcript of the recording, that provided by a whistleblower, it is stated that the meeting includes Z.Z., a person involved in Racket and a third, unidentified person, in May 2019. If the Government and/or the prosecutors want to find out if Zaev’s lying or not, it can determined easily. The Government building is under a complete video surveillance and it won’t be difficult to get a list of everybody who visited Zaev there in May 2019. Zaev is lying and trying to conceal something, Milososki said.

The recording shows Zaev boasting about his control over the Supreme Court, including its chief justice Jovo Vangelovski, as well as the now disgraced Special Prosecutor Katica Janeva. Zaev is apparently discussing ways how to end some of the trial that Janeva initiated.