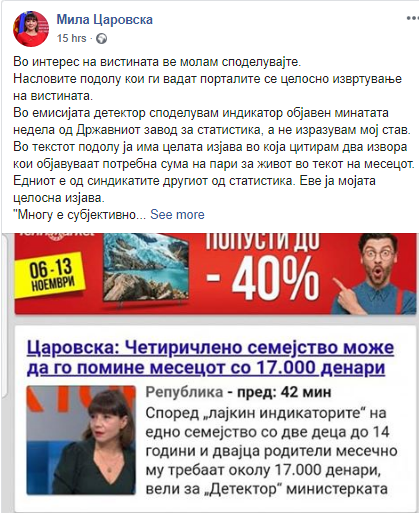 Labour and Welfare Minister Mila Carovska sought to clarify her statement yesterday, where she said that, according to a set of indicators, a family of four can live on 280 EUR (17.000 denars) a month. Carovska made the shocking statement as she was promoting the latest minimum wage hike to 14.500 denars, which she said brings the minimum wage close to the salary needed to support a family.

Please share this in the interest of truth. The headlines are distorting the truth. I was just sharing an indicator published by the State Statistics Bureau (DZS), and I did not give my opinion, Carovska said in her clarification, after her statement exploded in the public and caused outraged replies.

Carovska published her full statement, which arguably makes matters worse, because in it she confirms that the basis for the Government’s policies are, among other, the Laeken indicators, which were seen in the public as grossly insufficient.

“It is very subjective to say what it would take. The Laeken indicators tells us what it is. Annually you need 203.700 denars for a family of four – two children and two adults (nearly 17.000 denars per month). That is almost at the level of the minimum wage. That is one calculation. If we go by the unions, they say the limit is 32.000 denars, twice than this previous calculation. But if we are talking about the lacking quality of life and what a family needs it could go much higher. But we can’t base our policies on assumptions. The numbers calculated by the union or DZS through the Laeken indicators serve as the basis to create our policies”.

Unlike Carovska, Spasovski uses his video message to assure Zaev he is not after his job