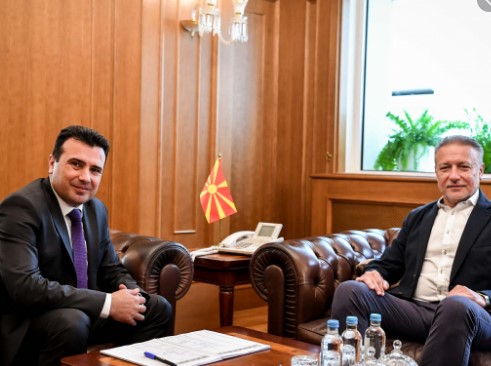 Two new audio leaks show SDSM party leader Zoran Zaev bragging how he removed any influence former party leader Branko Crvenkoski had over SDSM. The leaks follow recordings which revealed Zaev’s claim that he controls the ostensibly independent leftist NGO groups of the 2015 Colored Revolution and how he plans to neutralize them politically.

Crvenkovski led SDSM since its rebranding from the Communist Party in 1991, until 2011 when he handed the party over to Zaev. Crvenkovski was Prime Minister between 1991 and 1998, the murky period of high crime and chaotic transition from Communism, and then again starting in 2002, when he grabbed power after a wiretapping scandal, allegedly created by spy chief Zoran Veruevski sparked the 2001 civil war. He was President of the country between 2004 and 2009 and after leading SDSM in a disastrous campaign against VMRO-DPMNE in 2011, he resigned from politics and keeps a low profile.
– I took over SDSM. I alone fund SDSM. I don’t need Branko and I don’t need Branko’s men. It’s time for Branko’s period in SDSM to end, Zaev is heard saying in the leak.

His interlocutor, whose voice is modified, is incredulous, asking him what does he mean that SDSM does not need Crvenkovski any more. “He lost all influence in SDSM”, Zaev insists, and his interlocutor says: “Zoki, you are very wrong to underestimate the man”.

In another, very short recording, Zaev is asked if he can provide a million EUR for something, and he says that he is worth 8.5 million EUR.

The latest tapes are very similar to the earlier leaks which Zaev attributed to Aleksandar Verusevski, the son of his own security adviser Zoran Verusevski and former top spy chief who helped Zaev grab power by providing him with leaks of VMRO-DPMNE officials.