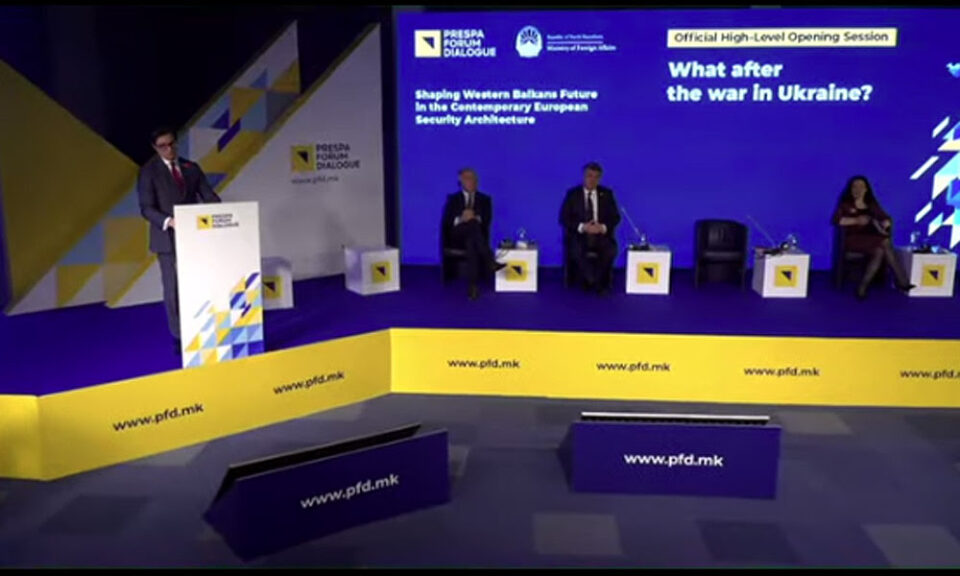 The war in Ukraine cannot be good for anyone and I would not say it is beneficial for the membership of my country in the European Union, President Stevo Pendarovski told panel “What after the War in Ukraine” within the Prespa Forum Dialogue in Ohrid on Thursday.

Is the war in Ukraine an aid to the integration process, does it encourage and facilitate the membership of new candidates? – No! It cannot be said that any war in the world is positive for any country. I would not like to say that the war in Ukraine is favorable for my country’s EU membership. The geopolitical aspects of European integration need to be considered. If we say that there is a connection between the two, we must acknowledge that there are structural flaws in the European security architecture. If we say that because of those shortcomings we should start acting now, then it will not contribute to overcoming those shortcomings, Pendarovski said.

He stressed that the unfinished project for European integration has consequences for the countries that want to become part of the Union and added that our country has been a candidate for membership for 17 years and we have been running for that goal for years and decades.

It seems to me that the unfinished project for European integration has consequences for the Western Balkans and the countries that want to become candidates for membership in the future. I can see a direct link between the unfinished EU project and the security architecture of old Europe. First, Russia has been undermining our societies for years, if we talk about Macedonia, we are talking about hybrid threats, fake news, especially regarding the name issue. Once the war in Ukraine is over, Russia will return to the old methods, fighting again against the democracies of the West with fake news and propaganda, emphasizing that we should not run towards EU or NATO membership, Pendarovski said.