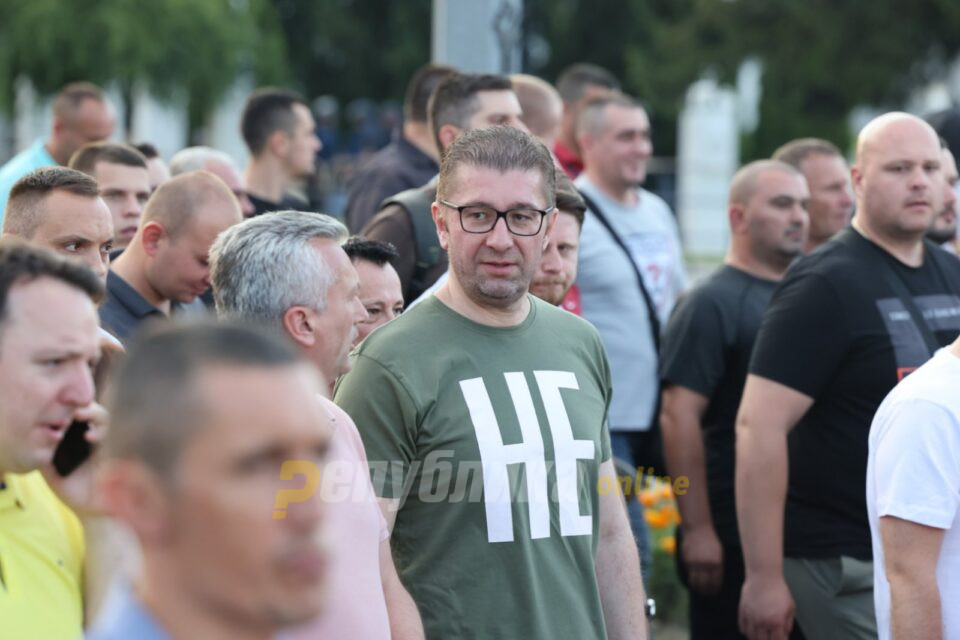 What is happening at the moment, what is the situation like, are there protests or will there be no protest today due to the Qurban Bayram holiday?

Mr. Mickoski, when did the protests start and what are the basic demands of the protesters?

Mickoski: The government to say NO, because the last modified proposal that we received represents nothing but a typical assimilation of the Macedonian people and the Macedonian identity.

Practically, all the Bulgarians’ claims that we are Macedonians some creation of Tito’s Yugoslavia and that we were Bulgarians before and that we do not speak our Macedonian language which was codified as early as 1945, that nothing existed, that it was all Bulgaria and that practically our Macedonian nation and people have existed since 1945 and that is unfortunately part of this French proposal which contains all the Bulgarian positions. We cannot accept this last proposal, neither as a people nor as a party. Now there is this corrupt elite in a government that has no rating, VMRO-DPMNE is a party that has two and a half times more rating than this government. and everything just to survive a few more months where it is. It is the main demand of the protesting citizens that the government should withdraw from accepting the French proposal and say NO. A few days ago, they organized an incident. We have identified five people who were shooting at the people. They shot at the people. The people literally went toward the guns with their bare hands and it could be seen in pictures and videos. Imagine if the people went toward guns with their bare hands, how far things went.

You mentioned the incidents, tell me why there were so many incidents and arrests, and did all this cast a shadow on the demands of the protesters?

Mickoski: First, there is a group who are classic convicts and they have been blackmailed by the Ministry of the Interior in order to delete all the reports they have, to stage an incident, and by making an incident so that they manage to change the people’s minds to go out to protest. But the effect was completely opposite to what they expected, and the very next day, after a larger number of citizens showed up than there were on the first day when those first incidents happened, they immediately sent people who fired at the people. But the people, as I told you, started to fight with their bare hands. Imagine those people who fired at the people, they are the defenders of the European values that are part of this last modified French proposal. But in fact they are ordinary scoundrels who protect the government which has no credibility, because ¾ of the people want this government to leave, and this prime minister who is placed where he is only so that for a few more months Zaev can implement another agenda in the country. 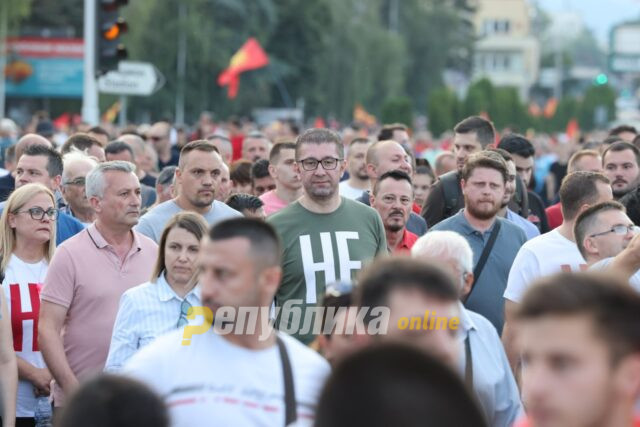 You accused the government of wanting to kill you, tell me what exactly it is about and what do you base such claims on?

Mickoski: I will give you an answer to that question as well, only if you allow me to add, we as a country signed a stabilization and association agreement back in 2000, even before Croatia. So that this Golgotha ​​of ours does not last 17 years, but 22 years. I work as a full-time professor at a university, I teach electronics, and I now have to explain to my students to believe in something that lasts for 22 years, and a large number of them, after completing their studies, go to the West or to America, Canada, Australia or anywhere. So this Golgotha of ours has been going on for 22 years, and I will say again this latest proposal, which is on the table now, does not mean the beginning of negotiations, but it is a painting in Brussels until we change our Constitution to bring in 750 families who speak Bulgarian language in our Preamble.

What will happen next, are you ready to block the entire country until your demands are met?

Mickoski: Well, yesterday was the first blockade, everything went well and successfully. We will continue with protests and blockades to convince this corrupt and non-national government to take a step back and abandon this proposal. This was also the case in the 90s, when there was the Lisbon Declaration, when the same people again convinced us that the name Macedonia should not be included in the name of the state, and when we refused it after a few years, everything changed. So it will be now. Instead of putting pressure on Macedonia, because we changed our flag, our constitution, we changed our name by force, now they want us to back down and change our identity and create a new identity according to the wishes of the Bulgarians. We will not accept that. 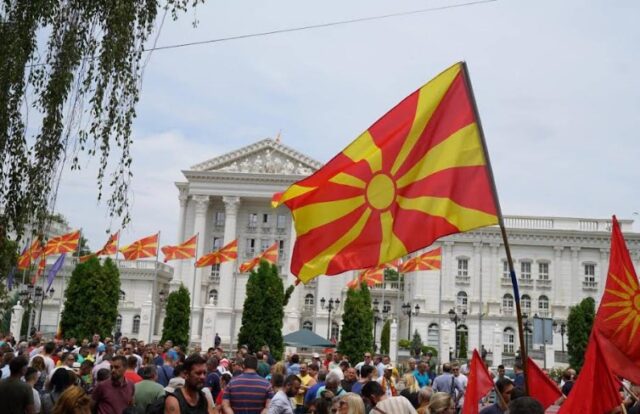 Mr. Mickoski, tell me if you have any information about whether you will get a chance to talk with some of the government officials in the near future?

Mickoski: I met with the Prime Minister and I told him that the two documents were on the table, the first one is the General Position of the EU and the second is the Joint Position of the EU. As the largest party in the country, because we have the largest number of deputies in the parliament, the largest number of mayors, the largest number of councilors in the municipal councils, we are practically the party with the highest rating and deserve to change 0.87 percent in the text of the agreement. Here, accept our remarks, and then we will accept everything else. But they also rejected that, and those are the essential parts in those two documents and there is another third document, that is the protocol. But no one has seen the protocol and who knows what they agreed on. And now they want us to accept something that no one has any idea what it is. Well, imagine if someone asks you to accept something on which the life of your family depends, and you don’t know what it is that you have to accept. And it is only because you believe me that you accept or reject it. I mean it’s so stupid that I can’t understand what’s going on. These are not the values I believe in in the 21st century.

Tell me how you see the epilogue of all this?

Mickoski: The government must step down. If it accepts then the fate of the country will be sealed. The thesis in which they say, accept this, sit at the table and negotiate, and if you don’t like it, leave the table is stupid. Well, we are now at the table and now we are negotiating about our identity. Why should my problem with Bulgaria, if we accept this, be a problem for the whole EU. That is the biggest problem, the Bulgarians want this not to be a problem anymore because they are now isolated, but for Macedonia to be a problem with the EU. That is the main problem.

Just to ask you one last question, you said that the government through its criminals tried to kill you during the protests, just tell me about that?

Mickoski: The threats have been going on for 4 years, but it culminated a year ago. I am the only person in Macedonia who has the highest rating and who leads the largest political party, and to whom the state does not allow security. And it’s all on purpose, so that what was supposed to happen the other day could happen. But I do not rule out the possibility, because for the last two days I have had threats against me and my family again. But I told them I’m ready to end my life, are you ready to pull the trigger?