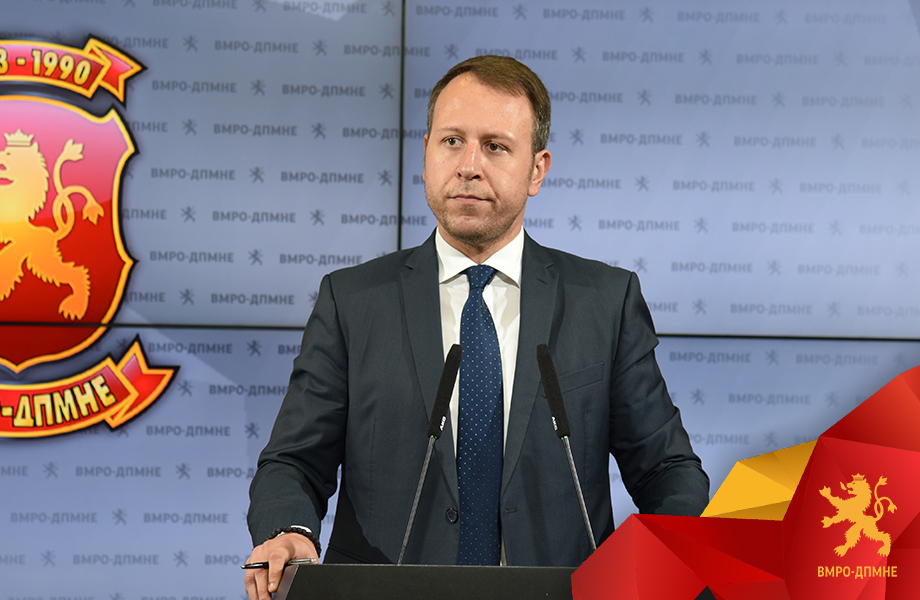 VMRO-DPMNE Secretary General Igor Janusev called on the Zaev Government to resign immediately, given the shocking tapes revealing how Special Prosecutor Katica Janeva was extorting money from a defendant in one of her biggest cases. Janusev blamed the prosecutor tasked with investigating this case, Vilma Ruskoska, of deliberate cover-up as the criminal actions approach people close to the ruling SDSM party.

The public clearly saw what we were talking about for moths. The Italian paper La Verita published recordings revealing how Boki 13, or Boki Tredici, is taking 1.5 million EUR in bribes for the benefit of Katica Janeva, as he is planning the next steps the Special Prosecutor’s Office will make in the criminal case. This reveals why the investigation into this case is mired and why prosecutor Vilma Ruskoska as well as Katica Janeva decided to go on vacation. The entire public knows about the racketeering, everybody is talking about it, and Vilma Ruskoska knows nothing. A novice prosecutor would connect the dots, but Ruskoska spent an entire month fooling the public and trying to limit the damage to the Zaev regime, and tries to persuade us that Boki Tredici acted alone, going into people’s homes and leaving with millions with no political backing what-so-ever. This is an international scandal and there must be accountability, Janusev said.

Janusev insists that this level of extortion is only possible with the help of a “network of judges, prosecutors and politicians, who were blackmailing people across the country, for years”.

We see that everything that Boki 13 promised in the tape came true. He even got the day when the Supreme Court made its decision right. Katica Janeva should be in detention instead of relaxing at the beach. Vilma Ruskoska must tell us why did she allow Katica Janeva to go free, to pressure witnesses and destroy evidence, and possibly flee the country. The tapes reveal that Boki 13 and Zoki Kicheec are just pawns and that someone else is the organizer of this scandal. An extortion racket worth millions, going on for years, could not happen, did not happen without the approval of Zoran Zaev, who holds absolute power in the Republic of Macedonia. Zaev, the Special Prosecutor’s Office and prosecutor Ruskoska are thoroughly compromised after this day and they are not capable of carrying on in their positions. We need an urgent resignation of the Government and early general elections, Janusev said.