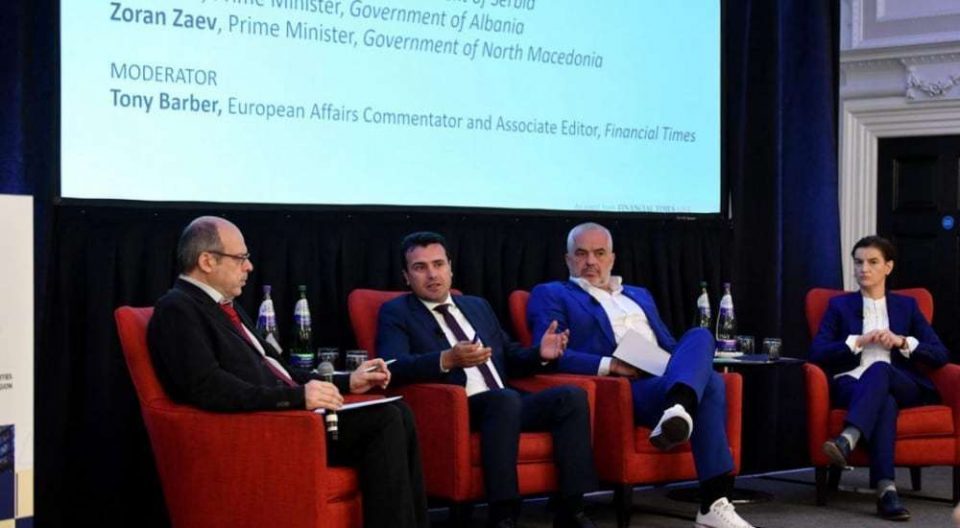 As Macedonia and Albania discuss whether and how to “decouple” in their quest to open EU accession talks, the Prime Minister Zoran Zaev and Edi Rama appeared together at a regional business forum in London held under the Berlin process.

Rama lashed out at Macedonian President Stevo Pendarovski, who suggested separating the EU accession bids of the two countries so that Macedonia would have an easier time getting the accession date. Rama reminded Pendarovski, and by extension Zaev, of the help he provided them in getting them both elected to their offices. Pendarovski quickly backed down in the argument and EU Commissioner Johannes Hahn suggested that the two countries will be judged as a package in October.

The two called on British companies to invest in the Balkans and touted their future EU accession as a factor that should play a role in their decisions.

“The PR centered approach is no longer working”

Mickoski expresses condolences to the victims of the earthquake in Turkey

VMRO plans a protest against the electricity price hike tomorrow

Respirators from the NATO reserve delivered to Macedonia

Mickoski expresses condolences to the victims of the earthquake in Turkey

VMRO-DPMNE President Hristijan Mickoski expressed his condolences to the families of the citizens of Turkey who were killed in the major earthquake earlier today. At least 17 people were killed and hundreds are injured in Izmir and its surroundings in Turkey, and two deaths were also reported from near-by...
Macedonia 30.10.20 | 20:55

VMRO plans a protest against the electricity price hike tomorrow

“The PR centered approach is no longer working”

Respirators from the NATO reserve delivered to Macedonia

Sharp drop in the number of imported cars

Handball in Macedonia put on hold due to Covid-19

Powerful earthquake off Turkey and Greece strikes in the Aegean Sea

In May, with 22 new infections, Kostadinov demanded Culev’s resignation, today with nearly 900 infections he is silent

Gjorcev: Coronavirus situation alarming, we have over 200 deaths and 2,000 infection weekly

Rapid COVID-19 tests to be available in Skopje starting next week, will cost 1000 denars