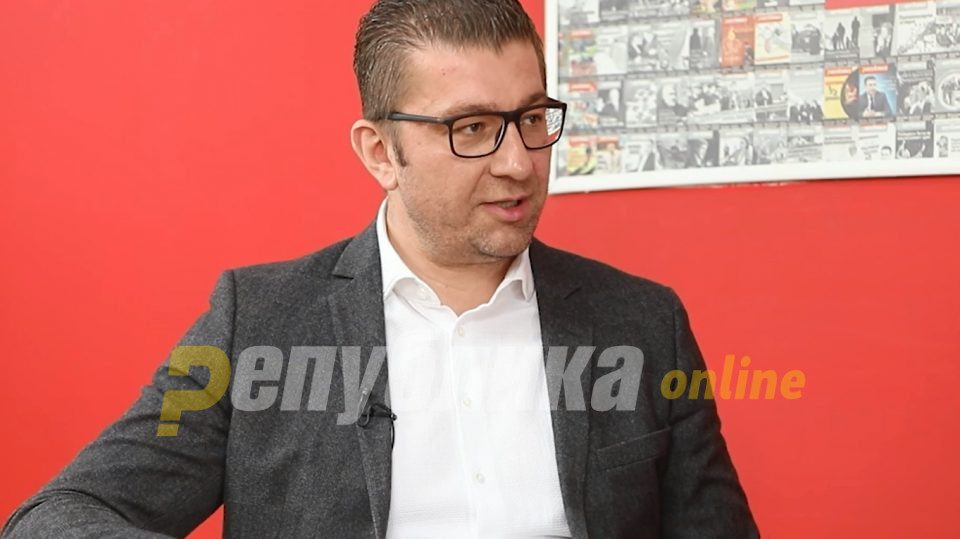 VMRO-DPMNE has never been opposed to an agreement with Greece, but the deal that Zoran Zaev reached had to be better. If Greece shows readiness to do so, we do not see a reason why this issue would not be opened again. International partners support an agreement between the two countries, but its content is of secondary importance. For them, it would be acceptable whatever was agreed, says Hristijan Mickoski, the leader of VMRO-DPMNE, the main opposition party in Macedonia, referring to the anniversary of the signing of the Prespa Agreement, which, after a 27-year dispute between Athens and Skopje, brought a name solution of his country. 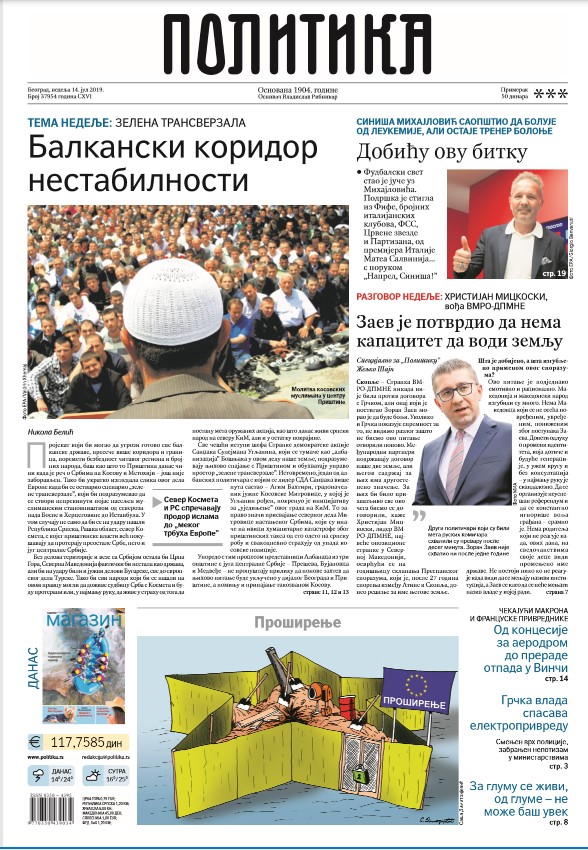 The issue is both emotional and rational. Macedonia and the Macedonian people lost a lot. There is no Macedonian who does not feel hurt, offended, humiliated by Zaev’s act. Deciding to change the identity that concerns them and future generations in a narrow circle and without consultation is scandalous. Organizing a referendum that is unsuccessful and constantly ignore the will of the citizens is shameful. There is no parent who does not react these days when he sees the changed name of the state on the certificates of their children. There is no one who does not react when they see that the names of the institutions are changed, and Zaev has sworn that he would not change the name of the government in which he works.

On the other hand, at a rational level, it has been a short time to say whether Macedonia gained or lost. Previously, the name was the only obstacle in the EU integration process, we now see that an even greater obstacle is the incompetence and corruption of the current government. It is a fact that the NATO membership process has been unblocked, but it is a fact that the economy, health care, education, what the citizens are most concerned about, is not good. Not only are they not improved, but they are also further exacerbated. Record number, over 500 000 Macedonians live below the poverty threshold, the state is enormously indebted, there is no capital investment, as well as foreign direct investments, airplanes and buses are filled with young people leaving with a one-way ticket. I do not see any gain here, nor do I see the opportunity for this incompetent government to do something positive.

The Prespa deal was strongly supported in international circles, primarily in Berlin, Brussels and Washington. European officials characterized it as a historic deal in the Western Balkans, which should set as an example for other regional disputes. However, when you look at the Euro-Atlantic perspectives of your country, it seems that Western leaders did not fulfill their promises with this deal. When we were convinced that the Westerners were talking one thing while doing another thing, how would this model of a deal be recommended for similar disputes in the region, first of all, I refer to the Belgrade – Pristina dispute?

The Western Balkans is the epicenter of conflicts of global strategic interests, first within the EU, then between the United States and the EU. This reflects the progress of Macedonia in Euro-Atlantic integration. The impression is that the Prime Minister, with the government’s reshuffle, ruled out the possibility of early parliamentary elections, which you insist on. The regular elections are next year, are you going to return to power after them?

Moreover, the polls are clear, and the mood of the citizens is even clearer. Citizens have had enough of Zoran Zaev. Everything he says is a lie. The man came to power without winning the elections. He formed a government with mortgages. Now it’s time to pay the price. Every passing day shows that this is not an isolated mistake, a corrupt or incompetent official, or a failed project. It shows that this is a system of operation or rather a failure to work. A combination of a desire for personal wealth, ignorance, arrogance, corruption and lack of respect for both the state and the citizens. So there is no dilemma about Zaev’s going to the opposition and the return of VMRO DPMNE to power. The question is just how much damage they will do and the consequences and the omissions that we will have to fix. Therefore, in the following period, we have to concentrate on making a good team and a better program to get Macedonia out of the mud. 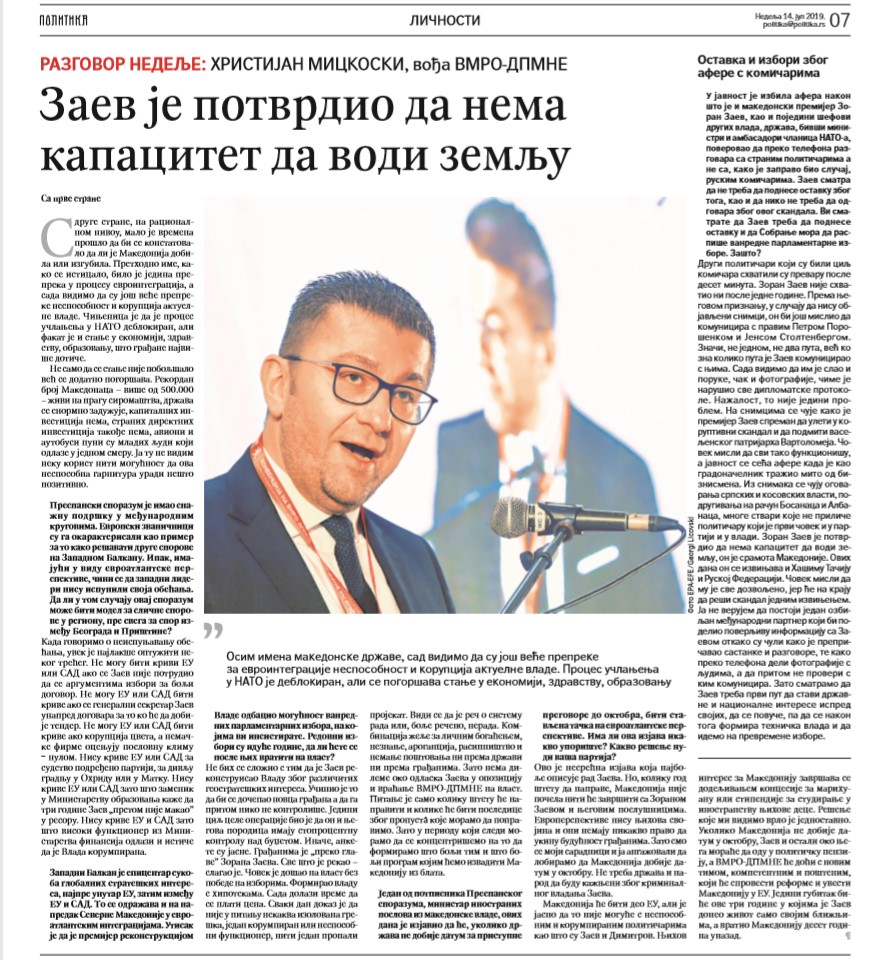 One of the signatories of the Prespa Agreement, the Minister of Foreign Affairs of the Macedonian government said recently that if the state does not receive a date for opening accession negotiations until October, an end will be put to the Euro-Atlantic perspectives. Does this statement have any basis? What solution is your party offering?

This is an unfortunate statement that best reflects Zaev’s work. But, no matter much damage they do, Macedonia has not begun, nor will it end with Zoran Zaev and his followers. The European perspective is not their property and they have no right to abolish the citizens’ future. That’s why I and all my associates have committed ourselves to lobby Macedonia to get a date in October. The state and the people should not be punished for the criminal rule of Zaev.

Macedonia will be part of the EU, but it is clear that this is not possible with incompetent and corrupt politicians like Zaev and Dimitrov. Their interest in Macedonia ended with the granting of marijuana concessions or scholarships for studying abroad for their own children. The solution that we see is very simple. If Macedonia does not get a date in October, Zaev and the rest around him will have to leave for a political pension, and VMRO DPMNE will come with a new team, competent and honest, which will carry out the reforms and bring Macedonia into the EU. The only loss will be these three years in which Zaev brought life to his closest relatives, and brought Macedonia backward for ten years.

A scandal broke out after Macedonian Prime Minister Zoran Zaev, as certain government leaders, former ministers and ambassadors of NATO member states, believed that he had a telephone conversation with foreign politicians and not with, as it really happened, Russian comedians. Zaev believes that he should not resign because of this, as well as that no one should be held accountable for this scandal. You think that Zaev should resign and the Parliament call early parliamentary elections. Why?

Other politicians targeted by the comedians have figured out the prank after ten minutes. Zoran Zaev did not realize it even after a year. According to his confession, if the tapes were not published, he would still think he was communicating with the real Poroshenko and Stoltenberg. So not once or twice, but who knows how many times Zaev communicated with them. Now we see that he also sent messages and photos. He violated all diplomatic protocols. Unfortunately, protocol violations are not the only problem. In the tapes, we can hear that Prime Minister Zaev is ready to enter into a corruption scandal and to bribe the Ecumenical Patriarch Bartholomew. The man thinks everyone works like him, and the public remembers the affair “One euro for the church, one euro for Vice”, when as a mayor he demanded a bribe from a businessman. In the tapes, we can hear gossip about Serbian and Kosovo authorities. In the tapes, there is a mockery of Bosnians and Albanians. In the tapes, we can hear many things unworthy of a politician who is the first person in the party and the government.

Zoran Zaev confirmed that he has no capacity to lead the country. Zoran Zaev is a shame for Macedonia. These days, he apologizes to Hashim Thaçi and the Russian Federation. The man thinks that he is allowed everything, because in the end he will solve the scandal with an apology. I do not believe that he has a serious international partner who would share sensitive information with Zaev after hearing how he recounts meetings and conversations and how he shares photos with people on the phone without checking with whom he communicates.

That is why we consider that Zaev should put state and national interests first before the personal, withdraw and resign, form a technical government and hold early elections.