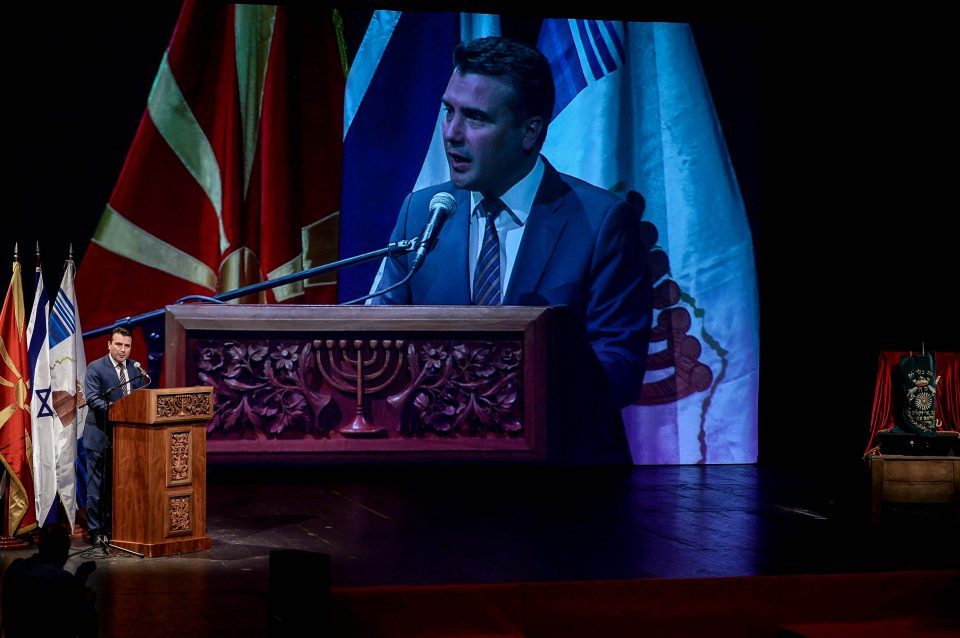 Zoran Zaev made a horrific gaffe during the Holocaust memorial event in Skopje, when, in part of his speech, he called the Holocaust “a Jewish tradition”.

The Prime Minister then made things worse when by abusing the Government public relations service, which distributed a doctored video, in which the offensive part of his remarks was cut out. The camera panned away from Zaev toward the audience to disguise how the audio was doctored to make it appear that Zaev did not make the ugly reference that sounded to the audience as if it is speaking favorably of the Holocaust.

The Holocaust is not only a Jewish tradition, or just one dark page in the Second World War, Zaev said.

Shortly after, while journalists and attendees at the event organised to commemorate the forced deportation of about 7.000 Jews living in Macedonia to the Treblinka camp, were still discussing what happened, the press service sent out a sanitized version of Zaev’s speech where the sentence looked like this: “The Holocaust is not just one dark page in the Second World War”. Even worse, the video, which focuses on Zaev for almost the entire speech, was doctored. At the precise moment Zaev made the gaffe, the footage is replaced with a shot of the audience, to cover up how the audio is cut.

Only after the attempt to cover up the horrific comment was published in a number of news outlets, Zaev was forced to issue an apology.

I made an unintentional mistake. The portion of the speech read “the Holocaust is not only a Jewish tragedy, or just one dark page in the Second World War” I mistakenly said “tradition” instead of “tragedy”. I assure you that my overall remarks were meant to condemn the genocide of the Jewish people and to offer condolences to the families of the Holocaust victims, Zaev wrote on his Facebook account.