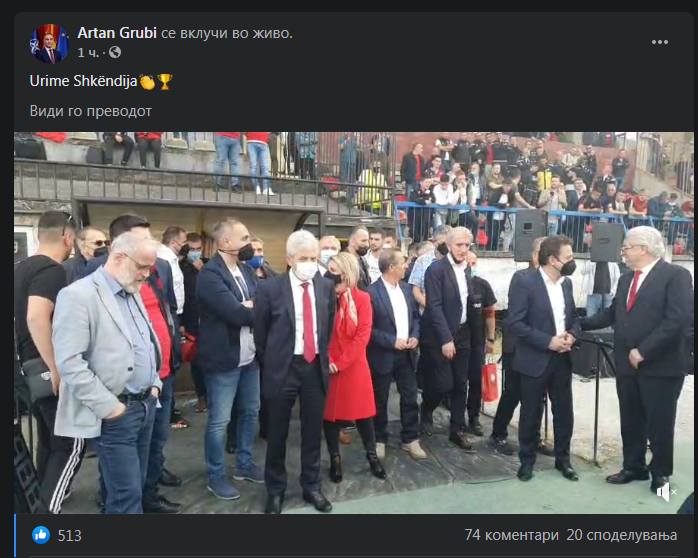 The leadership of the DUI party led a celebration today which was heavily tinged with Albanian nationalism, after the Shkendija club officially won the Macedonian first league title. Albanian pride was especially boosted as Vardar, the historic Skopje based club that is seen as nexus of Macedonian pride, was relegated to the second league after the Zaev regime pushed its main financial supporter, Russian businessman Sergey Samsonenko, out of the country.

DUI leader Ali Ahmeti, Parliament Speaker Talat Xhaferi, Tetovo Mayor Teuta Arifi and other top DUI officials led the celebration at the Tetovo stadium. Also present was Zaev’s de-facto co-Prime Minister Artan Grubi, who has built a career as an Albanian nationalist in the football hooligan groups. The party began after the final game of the season for Shkendija, against another mainly Albanian club – Shkupi. Shkendija supporters, who style themselves the Ballisti – after the World War Two Nazi linked Albanian paramilitary movement – stormed the pitch 15 minutes before the final whistle, efefctively stopping the game. The police had to remove fans from the stadium and announced it will press charges against the most unruly ones.