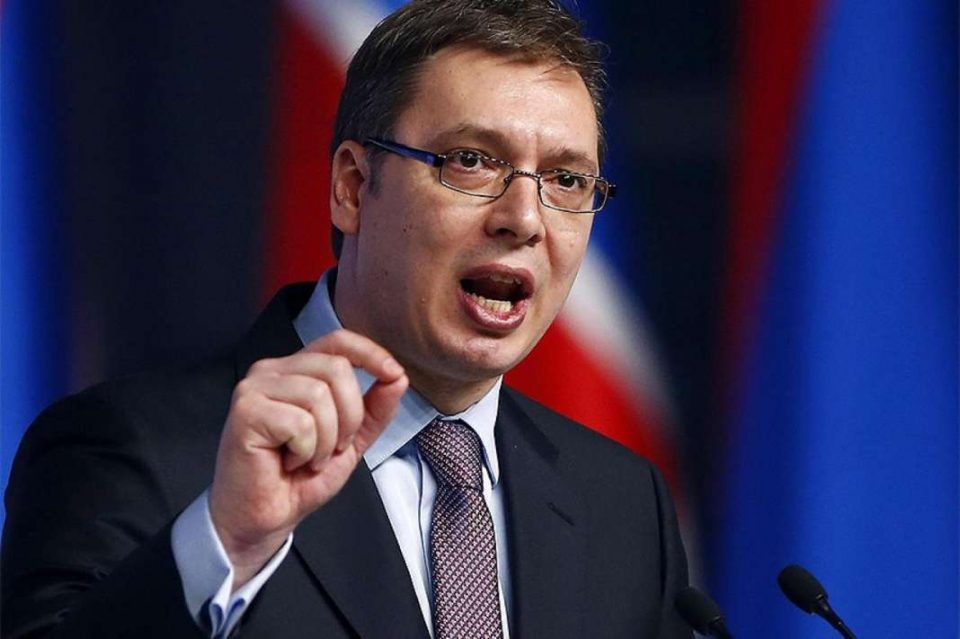 Aleksandar Vucic late on Tuesday spoke about possible solutions for Kosovo, but also about expectations from the upcoming meetings in Rome, but also in Tirana.

The president was a guest on Serbia’s public broadcaster RTS when he spoke about solutions for Kosovo after the Berlin summit, noting that he does not want to deceive his people by speaking badly about Haradinaj and Thaci.

“The essence is in this, Kosovo declared independence in 2008. We are in a difficult situation, and no one in this country should act stupid. We all know what’s happening in Kosovo and now everyone is looking for the culprit,” Vucic said, adding that he says that “a culprit” is needed, he means that this culprit would be himself.

“They lied to us from the West, together with their Albanian proteges. That was not legal. We are in a terribly difficult situation. Nobody play stupid in this country. Everybody knows everything perfectly well. As if they do not know that when the Albanians proclaimed independence they were running away from the country,” he said, in apparent reference to now opposition politicians who were in power in 2008, and added:

“We have seen the power of the great powers. I hope that I will at some point have the time to write a book about how pressure works. You’re constantly hearing, ‘We are against delimitation, but we want reconciliation to occur’.”

Asked about the solution offered by him, and to whom he offered it, Vucic said that he “failed to reach agreement on anything, and then had nothing to present to the people.”

“The idea was rejected, without anybody even hearing out what I was offering. I did not even get halfway in conversations with the opposite camp. The idea of ​​any compromise was rejected. Since it seems to me that everyone is acting stupid, what borders are we talking about? Half the world considers one kind of borders, another half others. I thought it was important to find a compromise solution. I apologize to the people for not lying to anybody. Everyone is talking about changing the borders. Now it’s you Vucic who is to blame for wanting to get something back,” the president said, and continued:

“I didn’t succeed because everyone was playing stupid. Germany’s response was negative from the beginning. Nothing is going on on the diplomatic plane, and that’s the worst for Serbia. I tried to do something that was the hardest. I was exposed to the most brutal campaign when they were saying I was going against Serbian interests, without even knowing what they were talking about. Again, unlike them, who were silent, I fight like a lion. I will not let anyone raise their voice to Serbia, I fight and safeguard peace and stability of our country.”

Asked if him not succeeding meant that Serbia “lost Kosovo,” Vucic said that he has been “fighting for six years like a lion and would not let anyone raise their voice to Serbia, without bringing it to a situation to be bombed.”

“I did not have the support of the domestic public for this. That hurt me the most. At the same time, I was the only one who helped Oliver Ivanovic. Both privately and as the president of Serbia, and for that there are witnesses from his family, and it is not a problem that I came under blows from others, but that Serbia did. I said that I hope that we will be able to say in the shortest possible time who is behind the murder (of Ivanovic). As I was told, they know everything, but the evidence is missing. I am completely certain that they are on an extraordinary trail when it comes to the investigation,” said Vucic.

He stressed that he does not think that everyone lives great lives, but that today’s Serbia’s GDP per capita is higher, and that another 44 percent increase will follow in just four years: “We have succeeded in transforming the country.”

Asked again about the idea that he had for Kosovo, the president said, “It’s not right to talk about something which I had no opportunity to even mention.”

Vucic pointed out that Serbia has transformed itself through economic reforms and has the highest growth in the Western Balkans.

“Who was in power in 2008 when Kosovo declared independence,” Vucic asked, adding, “This is a generational problem, but formally independence was proclaimed during the time of the authorities of Djilas and Jeremic, and what did they do?”

Serbia is fighting and is not on its knees like in 2008, and that’s why everyone is bothered by our country and by Vucic, the president said.

“Juncker interrupted Ana Brnabic when she spoke about Kosovo and said: Serbia acts responsibly, but the other side does not exist there,” Vucic said.

The president said that he has not yet been invited to Paris by President Macron, and that he still does not know what would be the subject of discussions there.

Vucic pointed out that this situation would continue until some new Serbian government emerges willing to recognize Kosovo.