As one of the highly politicized cases initiated by disgraced former Special Prosecutor Katica Janeva draws to the end, the defense today stated that all precedents point out to, at most, suspended sentences for the defendants. The trial is initiated against former Prime Minister Nikola Gruevski and former Transportation Minister Mile Janakieski, who were the most frequent targets of Janeva’s investigations, as well as former member of Parliament Daniela Rangelova. They’re accused of organizing a protest in front of the Centar municipality, as the SDSM party led majority was preparing to change the urban plans to prevent the reconstruction of a church demolished by the Communist regime.

During the protest, hundreds of conservative protesters chanted and some banged on the windows of the municipal building. An audio recording, of uncertain veracity, shows Gruevski discussing the planned protests and saying that someone might slap then Centar Mayor Andrej Zernovski. Zernovski was not attacked during the protest, and neither was any council member, but Janeva insisted that the case is tried as violent attack. 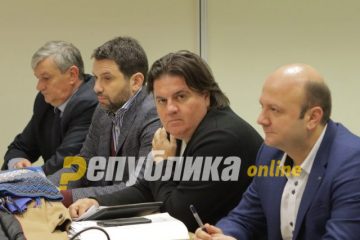 The defense today presented cases of similar, loud and unruly protests organized by SDSM, including some in which actual attacks on the police or destruction of public property took place. These include the torching of an office of President Ivanov in 2016 – situated in a residential building, a number of SDSM protests during their Colored Revolution in 2015 and attacks on VMRO party offices. These protests were organized by the SDSM party and far left groups allied with it.

This same court would hand down “not guilty” verdicts against protesters who took part in these incidents, or the charges would be dropped. We expect that the same standards apply in this case as well. But it is possible that in this atmosphere of political intimidation and display of power we have a different decision from the court. If we look solely to the evidence, most of the defendants should be released and at the most some should face suspended sentences, said defense attorney Elenko Milanov.
Gruevski remains in political asylum in Hungary and is unlikely to be extradited whatever the court decides and Rangelova now supports SDSM – likely as a result of the charges against her, but Janakieski has born the brunt of the criminal cases aimed at VMRO initiated by the Zaev regime.

A rare win for SDSM: Gerasimovski declares victory in Centar