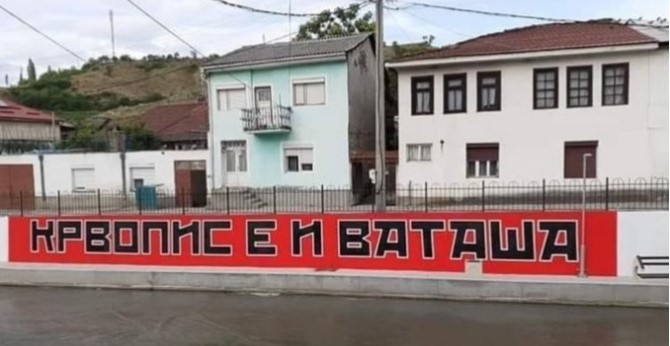 Citizens of Vatasha, near Kavadarci, responded to an interview with Bulgarian member of the European Parliament Andrey Kovatchev, who denied the World War Two crimes perpetrated by Bulgarian soldiers, by painting the slogan “Vatasha is written in blood”.

Vatasha had a history of rebelling both against Serbian and Bulgarian rule. During World War Two, in June 1943, occupying Bulgarian soldiers massacred 12 young men from Vatasha who they suspected of cooperatign with partisans. Those killed aged between 15 and 28, while four girls that were also taken to be shot, were eventually spared.

Kovatchev, who is campaigning strongly among Bulgarian nationalists on the Macedonian issue, did an interview with Alfa TV, during which he denied that Bulgarian forces perpetrated crimes in Macedonia during the war.

After Bucha, Biden accuses Putin of being a war criminal