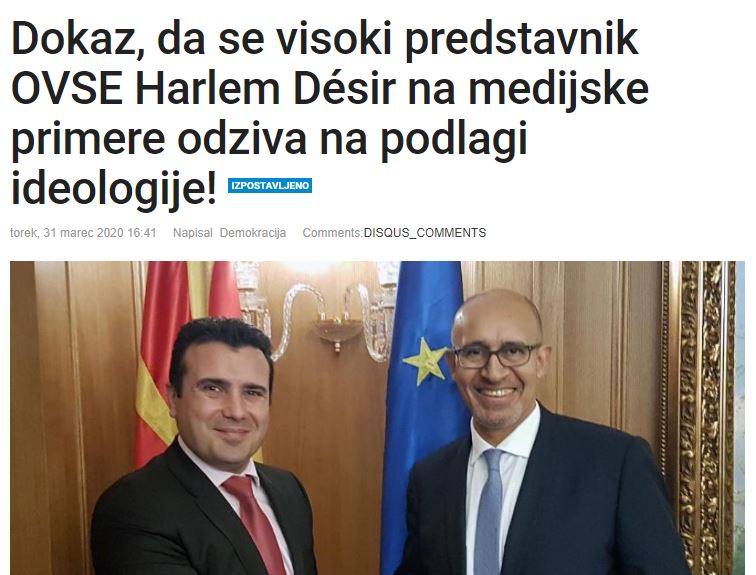 Slovenian “Demokracija” weekly called out OSCE media freedom representative Harlem Desir for his failure to respond to clear cases of intimidation of journalists.

“Demokracija” pointed to the example of Aleksandar Mitovski, the editor of Infomax in Macedonia, who was given a suspended two year prison sentence last month. Mitovski published the excerpts of a testimony by businessman Jordan Orce Kamcev, that reveals how former Prime Minister Zoran Zaev was involved in a major racketeering scandal.

When Mitovski was initially charged in September 2019, Desir tweeted out that he will be following the case closely.

Closely following the case of Aleksandar Mitovski editor for @InfomaxMk, who is charged for publishing official secrets in #NorthMacedonia.

But even though Mitovski was sentenced a month ago, Desir has remained silent.

Desir said that he will follow the case closely. But after the journalist was sentenced, there is no response or reaction from hm, “Demokracija” writes.

The Slovenian paper reminds the public that Mitovski’s sentencing is just one of the numerous assaults on media freedom in Macedonia, perpetrated by the ruling SDSM party. The very day Desir tweeted about the case, the police raided the offices of Netpress, another critical news outlet, which published an audio tape revealing the involvement of SDSM official Dragi Raskovski in a suspicious procurement of air traffic control equipment.

“Demokracija” calls out Desir, a former official of the French Socialist Party, for failing to respond to prior cases of intimidation of the press in Slovenia, when the left wing Government was pressuring companies that advertise in conservative news outlets, like “Demokracija”. As soon as the conservative SDS party came to office in Slovenia last month, Desir announced he is concerned about pressures against left wing news outlets, which, according to “Demokracija”, is a clear sign of political bias.

The sentencing of Aleksandar Mitovski is meant to intimidate him and other journalists, Naumovski says

Health Health, Venko Filipce, said at Tuesday’s press conference that of 868 tests performed, 76 new Covid -19 cases have been registered and one patient passed away. The official figures for municipalities and cities have not been released yet, for which, as Filipce explained, results were expected...
Macedonia 02.06.20 | 17:59