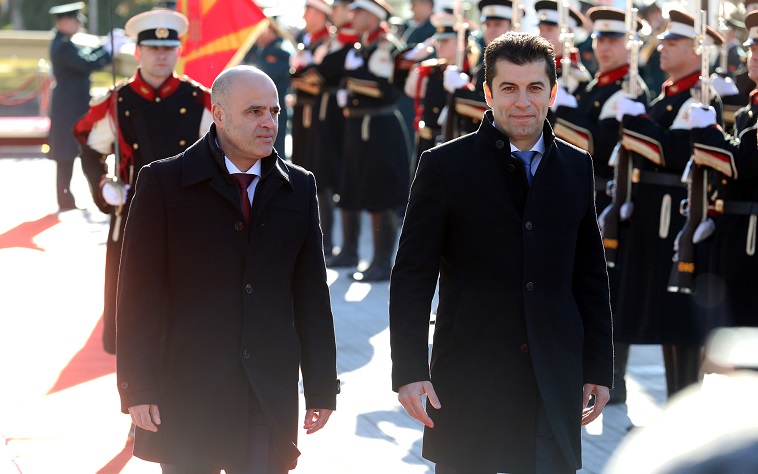 Bulgarian Prime Minister Kiril Petkov is paying his first official visit to Macedonia today, and before the visit he announced a new approach to the talks on resolving the dispute between Skopje and Sofia. The newspaper “Frankfurter Allgemeine Zeitung” (FAZ) today published an analysis on that very topic entitled “Rehearsal for improving relations in Skopje.”

FAZ writes that Croatia is the last country to join the European Union in the summer of 2013 and European Enlargement has been put on hold ever since. There are several arguments as to why this is true. French Prime Minister Emmanuel Macron often points to a pause in EU enlargement. For years, he points out, the EU has barely survived with existing member states when it comes to making important decisions that must be taken unanimously. Macron wants the EU to first reform voting procedures, at least for important decisions. In the Balkans, there are countries that still want and do everything to join the EU. The accession of these countries to the EU is the main foreign policy. They are: Albania, Bosnia and Herzegovina, Kosovo, Montenegro, Macedonia and Serbia. However, no country has made concessions and paid more than Macedonia.

Former Macedonian Prime Minister Zoran Zaev, together with former Greek Prime Minister Alexis Tsipras even managed to change the name of the country, which was previously called only Macedonia, in 2018, thus overcoming the long-standing name dispute that Macedonia had with Greece. However, as soon as the Greek veto was lifted, the country was blocked again: Bulgaria is now preventing Macedonia from starting accession talks with the EU with a series of so-called historic demands. For example, Macedonia can no longer call the Bulgarian occupation from the Second World War an occupation, it must recognize that the roots of the Macedonian language are Bulgarian and recognize the existence of a Bulgarian minority in the preamble of its constitution, writes FAZ.

Although such demands from Sofia are nothing new, they have not been noticed in Europe in the past due to the more absurd demands by Greece, the newspaper writes. Ten years ago, former Bulgarian Prime Minister Rosen Plevneliev said that if Macedonia wanted to start any negotiations with the EU, the country must stop its anti-Bulgarian policy. 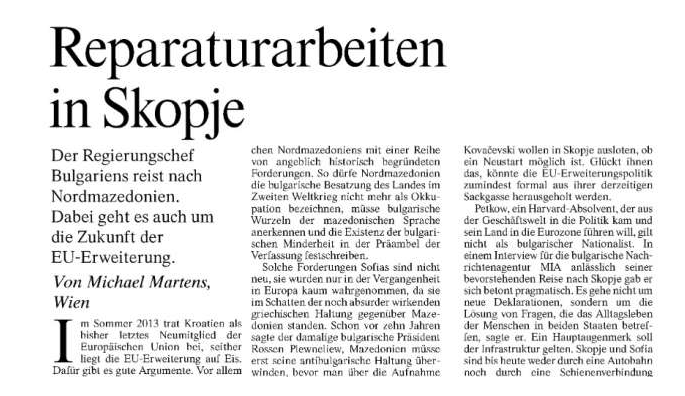 However, at that time, there was a dubious history policy in Skopje. However, the current leadership in the country should in no way be blamed for anything like that. As a result of the Bulgarian veto, from which Albania also suffers as collateral damage, the last memories of the European policy of enlargement in the Balkans seem to be sinking. Among other things, this means that the influence that the EU has in the Balkans is becoming smaller, writes FAZ.

Petkov and Kovacevski want to find solutions for the resumption of negotiations. If they succeed, EU enlargement could at least be formally restarted. Petkov, who graduated from Harvard and entered the politics of the business sector, wants to introduce his country in the eurozone, is not considered a Bulgarian nationalist, writes FAZ.

In an interview with the MIA new agency, which he gave before the planned trip to Skopje, the medium states that he presents himself as a pragmatic man.

There is no need for new declarations, but the problems that are important for the people in both countries should be solved, said Petkov.

The main focus should be on infrastructure. To date, Skopje and Sofia are not directly connected by either highway or railway. There is no direct airline between the two cities. That must change.

The Bulgarian government wants to strengthen the trust, which has been destroyed, with serious projects. Five working groups (on business, culture, infrastructure, European integration and history), which should meet once a week, should accelerate the improvement of relations, the text said.

Petkov was quoted as saying that he had a constructive telephone conversation with Kovacevski. The two prime ministers agreed to bring in as many companies from both countries as possible to boost economic relations. However, says the medium, although Petkov is a pragmatist, it is not clear that anything can be changed in the negotiations between the two countries.

The Bulgarian Prime Minister will have to give up many things, because the Socialist Party, which is traditionally nationalist towards Macedonia, is part of the Bulgarian government. Bulgarian President Rumen Radev, a former fighter pilot who trained in the Warsaw Pact countries, is a man who has completely challenged the whole of socialist historiography. His nationalist statements towards Macedonia often indicate that he will never be able to break away from that former socialist policy. “He is talking about nationalist issues, which take place in the 19th century, the analysis said.

In the interview, Petkov pointed out that there are destructive forces in both countries that work against good neighborly relations.

However, some experts are still unsure how far Petkov will be able to distance himself from those destructive forces. The Bulgarian historian Rosen Milev, who often criticizes the Bulgarian nationalist policy towards Macedonia, points to a contradiction. Although Petkov, in line with the nationalist elements in Bulgaria, demands that the Bulgarian minority in Macedonia be accepted and included in the country’s constitution, he refuses to even discuss the existence of a Macedonian minority in Bulgaria.

That’s scandalous. How can a prime minister in Europe say that a country must recognize a minority in a neighboring country but refuse to talk about the opposite case? It goes against everything in Europe, explains Milev, concludes FAZ.