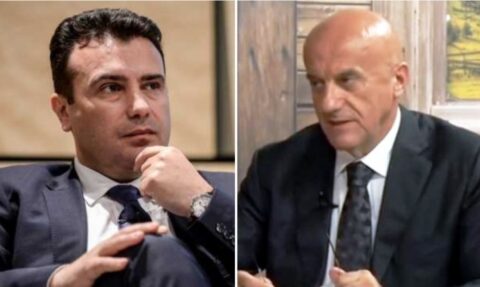 The buyer of the construction site of SHIK “JELAK” in Tetovo, Miodrag Daka Davidovic, is a businessman and a prominent representative of the Serbs from Montenegro and a benefactor of the Serbian Orthodox Church. He was the head of the Niksic Security Center and a minister of Karadzic and Mladic in the government of SAO Herzegovina during the Chetnik massacres of Muslims. Serbian Patriarch Irinej decorated him with the Order of Saint Sava of the first degree and the Order of the Holy King Milutin, they were godparents with Momir Bulatovic. In 1997 he was arrested for embezzlement with the tobacco factory and Bulatovic pardoned him. In 2009 he was beaten with metal bars, in 2019 he was wounded in a failed assassination attempt. He donated all the profits of his company to the Serbian Orthodox Church for the rest of his life, Xhevdet Hajredini wrote on Facebook.

Teuta Arifi, with the help of Zaev, certainly not without the knowledge and consent of Ali Ameti, enabled this criminal businessman, to build a large residential and business building in Tetovo on an area of over 30,000 m2. Does anyone believe that this guy was brought to Tetovo without paying a bribe? If it is not about corruption, then why Teuta, DUI and Zaev at the election rallies do not brag about this big foreign investor who came to Macedonia on their merit, Hajredini asks.