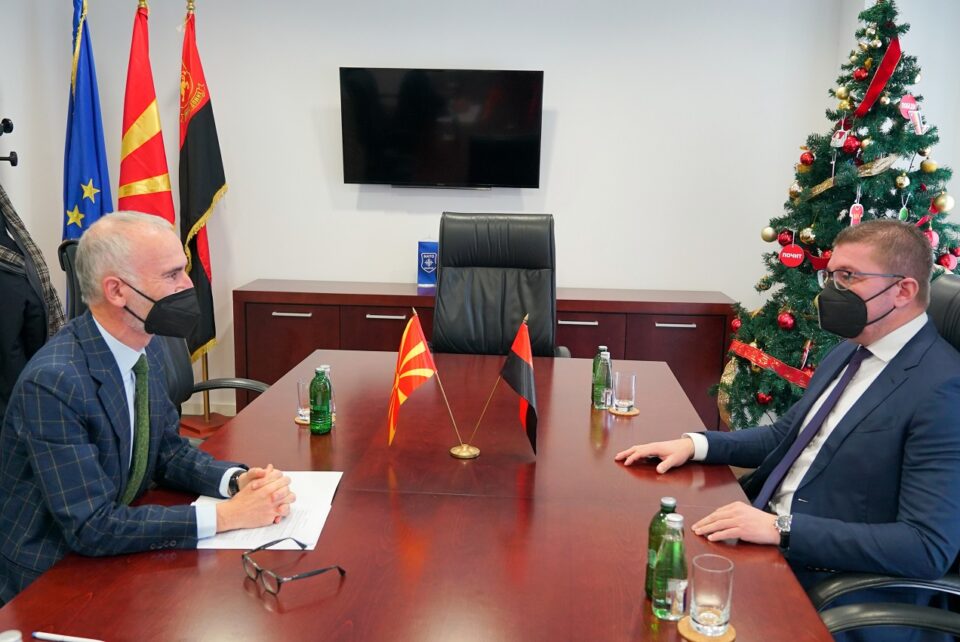 VMRO-DPMNE leader Hristijan Mickoski met Thursday with Italian Ambassador to the Republic of Macedonia, Andrea Silvestri. As VMRO-DPMNE informed, the meeting discussed the current political and economic situation in the country, but also Macedonia’s EU integration.

Mickoski expressed concern that Macedonia, in addition to the economic and health crisis, found itself in two other crises, energy and the crisis with supply of heating, pointing out that the government not only cannot deal with them, but deepens them.

He pointed out that the new government, which is only a continuation of the previous one, has no plan or capacity to respond to the challenges facing the country, and cannot adequately help the citizens who are exposed to increasing costs every day precisely because of the wrong and unreasonable government policies.

The VMRO-DPMNE leader pointed out at the meeting that the government cannot respond to key issues important for European integration, such as judicial reform, rule of law and reducing high corruption.

Mickoski emphasized that in order to overcome the crisis and the difficult situation in which Macedonia finds itself and guided by the will of the citizens from the last local elections, early parliamentary elections are needed. He said that VMRO-DPMNE is ready to give up the technical government and agree to one constituency if that is the obstacle, because Macedonia must no longer go backwards and must finally start moving forward.