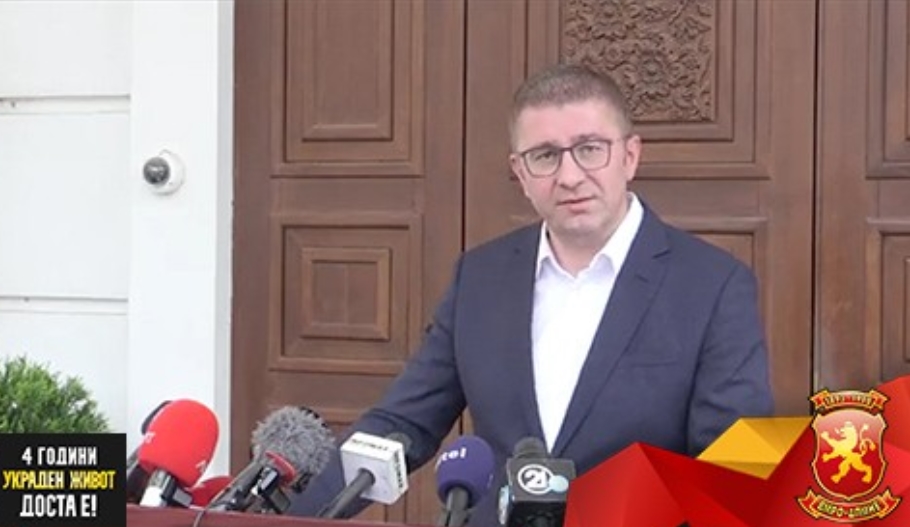 The topic of today’s statement is the activities that VMRO-DPMNE will undertake in the coming period, and refer to the secret negotiations that the Zaev – Buckovski duo are holding with official Sofia, and refer practically to the future of Macedonia and the European integration process of the Macedonian people, nation and state within the European Union, said the leader of VMRO-DPMNE, Hristijan Mickoski on Monday.

What I want to say today, but also to repeat, is that we learned from high-level diplomatic sources, from Brussels, but also from official Sofia that the demands that are an integral part of the Declaration adopted by the Bulgarian Parliament will practically be part of Macedonia’s negotiating framework with the European Union and from that moment the bilateral problem we have with official Sofia, and refers to the uniqueness of the Macedonian people, culture, tradition, customs, Macedonian language, anti-fascist struggle, all those problems contained in the Declaration adopted by the Bulgarian Parliament will be a problem that we will have with the European Union, ie from a bilateral problem it will grow into a problem between Macedonia and the European Union. We can prevent this only in one way, and that is the public with its criticism, and at the same time the people on the streets, within which VMRO-DPMNE every day starting tomorrow will block Skopje in three places and ten cities in Macedonia in the period from 3 to 5 p.m. until the public is shown the document “Roadmap” or whatever you want to call it, which was negotiated by the Zaev-Buckovski duo with official Sofia, and refers to the acceptance of the Declaration adopted in the Bulgarian Parliament in 2019, to be part of the negotiation process or to be more precise it is the first cluster “fundamentals” or pre-chapter. So, as a nation and as a state, if this is part of the negotiation, we will be faced with a double choice, and that is either assimilation – Bulgarianization in a day when we will complete the reforms and be part of the EU or freeze and abandon the EU dream, pointed out Mickoski.

He also urged all political parties, whether left, right or center, whether in Parliament or outside Parliament, to join the blockades, because the Macedonian people, the Macedonian nation deserve defense at this time.