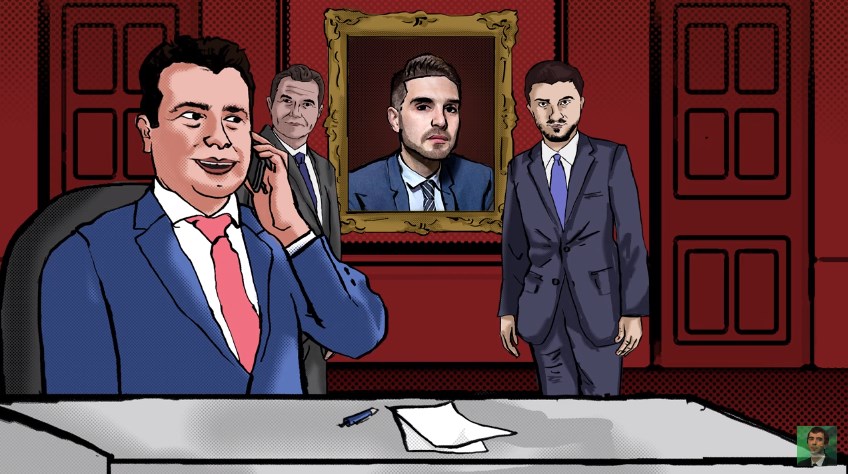 During the eight minute audio, which was animated to show Zaev taking the call with his spokesmen, he agrees to shut down the Ohrid airport to help protect the climate, badmouths French President Emmanuel Macron who blocked Macedonia from opening EU accession talks, and discusses smoking marijuana and his ownership of marijuana plantations. The Russians, pretending to be Greta and her father, also got Zaev to discuss Trump, the cooperation he is receiving from George Soros and the possibility to settle migrants in Macedonia.

Vovan and Lexus got a number of politicians, such as Bernie Sanders, as well as people like Prince Harry and Billie Eilish to talk to “Greta” and recorded their conversations. This is the second time they pranked Zaev – in the initial series of calls, published in 2019, they revealed that they managed to develop a lasting relationship with him, duping him that he is in contact with the Ukrainian President Petro Poroshenko, and at one point NATO Secretary General Jens Stoltenberg. Zaev willingly called and texted “Poroshenko” providing the pranksters with sensitive data. He discussed his fear that the planned partition of Kosovo would disturb the Balkans, Macedonia’s NATO accession and even offered to bribe the Ecumenical Patriarch Bartholomew.

Something happened there, but I hope that he will be more responsible in the future, because, France, Germany, that kinds of countries are leaders in the world, they must lead the world in a positive manner, not in that kind of changing the position, Zaev says about President Macron, discussing the French move to block the opening of accession talks.

The pranksters then try to get Zaev to halve the number of international airports in Macedonia.

– Do you know by the how many airports do you have in the country?
– Two. We have one in our capital and one is very famous touristic place Ohrid.
– I think you need to close some airports, to offset the carbon footprint.
– Mhm. Ok. That is also good idea. Yes, why now, yes. Every idea is good to develop. We have only two airports, we don’t have more, we are a small country, but here in the region there are lots of airports, Zaev agrees to the proposal.

After some of the targets of the long developing prank alterted the public, and Greta herself warned people to be careful and that someone is pretending to be her, the Zaev office issued a press release, saying that he was the victim of a “hybrid attack”.