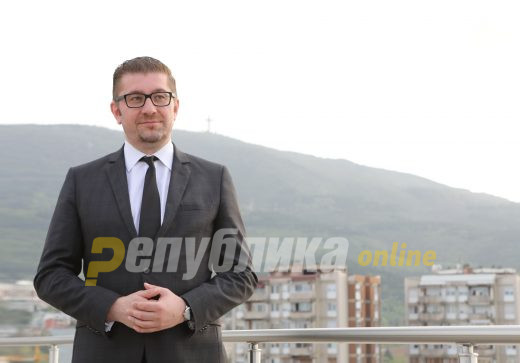 In an exclusive interview with Republika, VMRO-DPMNE President Hristijan Mickoski discusses the political crisis that developed after a corruption scandal forced Special Prosecutor Katica Janeva to resign. Mickoski insists that the Government is attempting to cover up the scandal and to replace Janeva with another prosecutor loyal to Zaev Zaev which, he adds, must be opposed for the sake of restoring independence to Macedonia’s judiciary.

Prime Minister Zaev decided to propose his own law on state prosecutors. You oppose the proposal. Why, and do you expect to see your positions align somewhere?

Mickoski: The Government did not propose a Special Prosecutor’s Office which will be truly independent and will go after actual crimes. Their intent is to have an SPO that would be tailor made to suit Zaev’s needs and the needs of his criminal octopus. Now that the Prime Minister assured himself in the fact that the SPO is compromised, and this happened mainly because of the political influence he himself and his people had over the office, which led to the corrupt scandal involving its chief Special Prosecutor Katica Janeva, so now he basically accepted the VMRO-DPMNE proposal to end the SPO and to form a new unit which would be part of the regular state prosecutor’s service and would investigate high crimes and corruption. But, the problem now is that Zaev wants to push through his own proposal for this new SPO, and to have compromised people run it, including some of the same people who were in Janeva’s SPO. The aim here is to help Zaev cling on to power, after the first SPO allowed him to grab power. What would happen is that, hypothetically, the Talir case, which is created for political reasons, designed to harm VMRO-DPNNE, would continue, but actual crimes perpetrated by this Government would be ignored. The Government has simply shown us that it has no interest to seriously tackle corruption and is in fact protecting corruption. They hold the responsibility to lead our country for a third year now, and they haven’t resolved a single criminal scandal. We can’t allow that this ruined SPO is replaced with another just as unprofessional and corrupt, no matter what its new name is. 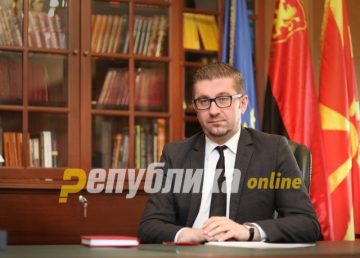 Zaev proposed Vilma Ruskoska as the new Special Prosecutor. You say this is unacceptable?

Mickoski: Zaev confirmed what I’ve said all along – that Ruskoska is his own choice for a prosecutor, and that he wants to replace Katica Janeva with another just like her. It is clear that his proposal is nothing more than mockery of the laws and the rule of law. How can we have a woman who combined incompetence and taking political orders fight crime or restore justice? All that’s lacking here is for Zaev to nominate Dobrila Kacarska to become the Chief Supreme Court Justice and we might just as well slap the SDSM party logo on all these judicial institutions. Zaev, who praised Katica Janeva, now praises Vilma Ruskoska using the exact same words, which should concern us. The first prosecutor is involved in a scandal worth millions of euros, and the second one is ostensibly working to uncover the scandal but somehow she never gets around to charging Janeva, Janeva’s collaborators from the Government, or the Prime Minister. Please, this is a serious situation and we can’t allow such people to sit in so important institutions.

Do you expect to see Zaev get to the necessary two thirds majority in Parliament despite your objections?

Mickoski: Zoran Zaev must understand that he is no longer the political factor who can impose conditions and dictate events. If he thinks that he can pass such systemic laws without the main opposition group in Parliament, then he is mistaken. He is also mistaken if he thinks he can again blackmail and threaten his way to a majority, because the country is no longer afraid of Zaev and all know that his days in politics are numbered. This current SPO was approved in Parliament with a consensual support of all parties, and at the time Zaev insisted that the law is not enough. Does it make sense that now, when Zaev is Prime Minister he is pushing his personal favorites to be prosecutors, without opposition approval? Why then did we waste so much time holding working groups and leading on the domestic and international public? We have entered a period 100 times worse than what we had before, and the criminal octopus is permeated the whole of society.

Zaev and his SDSM party prepared a declaration of support for the rule of law and they accuse you of standing in the way of justice.

Mickoski: First of all, Zaev and SDSM are in their third year in power. What were they waiting for, why didn’t they restore justice by now? That is their job, what they are paid for. There is no justice with these people, they are the source of injustice and protectors of crime. You can’t expect justice from a man who only knows crime. We all saw him ask for bribes for his brother Vice, through the Strumica church. You expect justice from a man like that? They are simply stealing talking points from the opposition which means their PR is not good either. What was stopping them until now? A month ago we heard a member of Parliament ordering an illegal substance, we heard a Mayor beating up a man in his office, we heard how M-NAV procurement contracts are being rigged, we heard how Zaev talks to the fake Porosenko and Stoltenberg and in five seconds agrees to bribe Patriarch Bartholomew, and these days we hear that what SPO was doing in liege with people in the Government. So tell me, do you see any determination to fight crime among these people, did they tackle any of these cases? Over the month we saw their criminal octopus with all its filth and wrongdoing. There is no hope that any segment of this worn out Government will restore justice. They are burying justice. The fish rots from the head. There is no justice with Zoran Zaev. It is even disgraceful to hear this group of people, which inflicted so many injustices, talk about justice. It is surreal, but also irresponsible, like giving your wallet to a cleptomaniac for safe-keeping. Or like contracting the king of unlawful construction in Ohrid, who is protected by his proximity to the Government, to demolish unlawfully built housing. Zaev is simply a hostage of all the criminal, racketeering groups in the country who helped him assume power and remain there. These same people are now delivering their bills to the Prime Minister, to pay what he owes them, and this is why he now even wants to assume competencies of municipal authorities. I’m prepared to go to the end so we can get justice.

The racketeering scandal reveals some interesting details, such as prosecutor Ruskoska saying that the wiretaps have included Katica Janeva. And yet Zaev still says he trust Janeva, as a person.

Mickoski: With each passing day we see confirmation of what we were saying, that it’s impossible to do all of this without the approval, the logistics and the support from the people high in the Government. This is a well developed scheme, with Zoran Zaev at the top. Let’s go through the Government’s inconsistencies which threaten to water down this scandal. How is it possible that Janeva is not detained, if she was involved in an active discussion with the main defendant, who is, all the while, a good friend and associate of Zoran Zaev and his top brass? Doesn’t this confirm that the racketeering was going on with the knowledge and approval of the chief Prosecutor in the compromised SPO office and of the Government leadership? If it is so, then why isn’t Janeva detained and why is Zaev covering for her? From the start we were asking if Katica Janeva was a party to the recorded conversations and if she is in the evidence. The Government and the prosecutors refused to answer, but now the situation slowly untangles. But we will not get the full picture if there is no full accountability by the Government. The Prime Minister says that he only once met with the second defendant. I ask him, is he sure in this? Were there maybe multiple meetings? He backpeddaled on several other points, let’s see if he does so here as well.

The prosecutors denied they have performed special investigative measures over Katica Janeva?

Mickoski: If this is true, why are they still looking for her second phone, unless it is part of a pre-arranged farce? Does anybody even know where Katica Janeva is? Or will the Government keep this is a mystery until they come up with some better plan. We are getting nowhere if the true protectors of this organizsed racket are help hidden. Until “Kiki” claims that he is not “Kiki”, and until “Friki” remains silent, and Zaev is pretending not to know about his party officials, it all makes him an accomplice and the chief supporter of this shameful crime. They must know that there is no justice without accoutnability, and we will seek accountability when we remove them from office.

Commissioner Johannes Hahn visits Macedonia next week, what do you expect from his visit?

Mickoski: He will hear our positions and our account of the situation in the country first hand. The international community shares the concern about the corruption scandals which have, unfortunately, become a daily occurence and hinder our progress. It will also be good to hear our arguments for the need to have an independent system of prosecutors and judiciary, which is a pre-condition to advance toward European integrations.