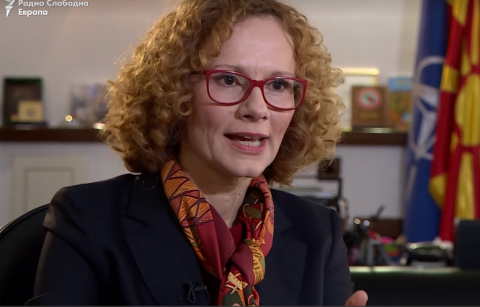 Defense Minister and SDSM party deputy leader Radmila Sekerinska dared the state prosecutors to investigate her role in the major Racket scandal. Multiple witness testimonies placed Sekerinska at the home of her close friend, Bojan Jovanovski – Boki 13, who is charged with extorting 20 million EUR from various businessmen, but Sekerinska has avoided commenting on the issue and is not under investigation herself.

The message from the Government was the same – the law should be applied. Nobody is above the law and the Racket case showed that nobody is. VMRO-DPMNE are the ones who are obstructing justice, even from opposition, Sekerinska told the Radio Free Europe in an interview.

VMRO-DPMNE called on the state prosecutors to investigate what were you doing in Boki 13’s home?

State prosecutors can investigate everything they want and we are not trying to stop them. And if we look into a list of who is a criminal, including the fugitive Gruevski, VMRO-DPMNE should be closed down, Sekerinska replied.

It is widely assumed that the extortion campaign undertaken by Boki 13 and former Special Prosecutor Katica Janeva could not happen without the knowledge and approval of the SDSM led Government. So far only one SDSM party official, Frosina Remenski, has been charged. Investigative reports alleged that, besides Sekerinska’s own personal friendship with Boki 13 but also his main victim Jordan Orce Kamcev, a close relative of her husband was officially involved in one of Boki’s criminal schemes.

And a recent report by journalist Branko Geroski, who did most of the reporting that led to reveal the scandal, declares Sekerinska as one of the five main figures involved in extortion.