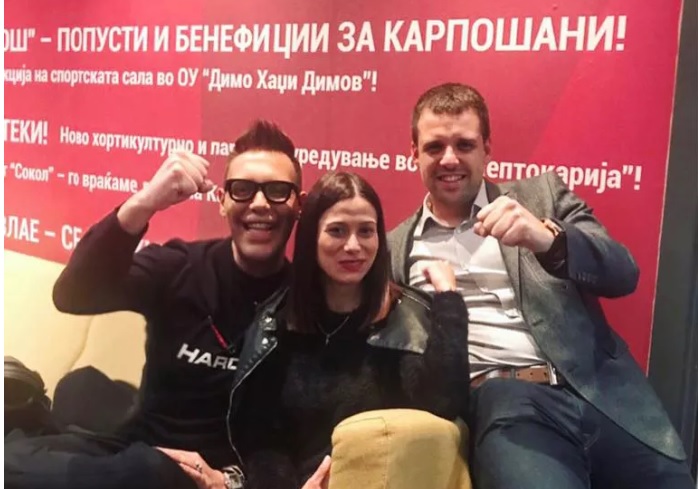 Bogoev, who is an up and coming star in SDSM politics and Boki 13 are inseparable, at least judging by the many pictures they would post together on their social media accounts. Jovanovski was arrested on Monday on charges that he extorted 1.5 million EUR from businessman Jordan Orce Kamcev, in a scandal which forced Special Prosecutor Katica Janeva to resign.

According to Vecer, Bogoev published a financial report about his campaign spending which can’t possibly account for the large number of billboards he rented, or for the volunteers. The financial report doesn’t even list spending on billboards, and yet Bogoev had 78 signs across the western Skopje municipality, including one that rents for 1.900 EUR. This item alone would set his campaign back 78.000 EUR. Bogoev was successful in his run, and the SDSM party organization he put in place is one of the best performing anywhere in Macedonia.

Bogoev also hired 100 people for his campaign, Vecer reports, which would have cost an estimated 80.000 EUR. All this spending was covered somehow, and Vecer points to the fact that, on top of his personal friendship with Boki 13, Bogoev’s father, Vladimir Bogoev, is a member of one of Boki 13’s charities. Other top SDSM officials in the charity include members of Parliament Frosina Remenski and Kostadin Kostadinov.

Prosecutors today confirmed that besides Kamcev, other businessmen were pressured by Boki 13 to pay bribes to his bogus charities or to purchase ads in his 1TV station, on the threat that, if they refuse, they will find themselves on the bad side of Special Prosecutor Janeva or top officials of the Zaev Government. Vecer’s report published today raises the question whether Boki 13 was using a portion of his proceeds from extortion to fund political campaigns for his SDSM friends and otherwise divert the money to the ruling party.

Mickoski: We have evidence of corruption in the Government