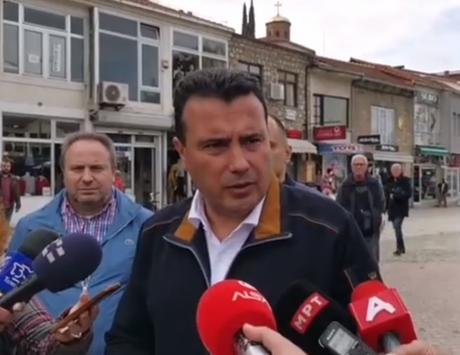 Zoran Zaev campaigned in Struga today, to support the DUI party mayoral candidate, incumbent Ramiz Merko. Zaev is desperate for the DUI votes in his race against VMRO-DPMNE in the capital Skopje, so he has to repay the favor by campaigning for the DUI candidates in contested races.

The coalition Government, the national coalition, is stable, and I hope to see it strengthen in the future. We are uniting for the second round. We will support each other where the coalition candidates are in the race, and where DUI and BESA are facing each other (Tetovo) we will let the voters decide, Zaev said.

Merko is one of the most notorious DUI local officials, and even Zaev denounced him last year, calling his previous endorsement of Merko a mistake – “we got burnt on that one”, Zaev said. Burning was a feature of Merko’s term in office, as developers would often burn reeds along the shore of lake Ohrid, to make way for beaches. His tactics were copied in near-by Ohrid, where the powerful DUI boss Nefi Useini led the charge in over-development, to the point that UNESCO threatened both municipalities that it will revoke their World Heritage Site status.

Merko faces Idri Istrefi from the Alliance of Albanians, who got 9,421 votes, against Merko’s 10,956 in the first round. Istrefi is supported by VMRO-DPMNE, while SDSM ran a rare challenger to DUI in Struga in the first round, who won 4,352 votes. Some of those votes will likely turn out for Merko in the second round.