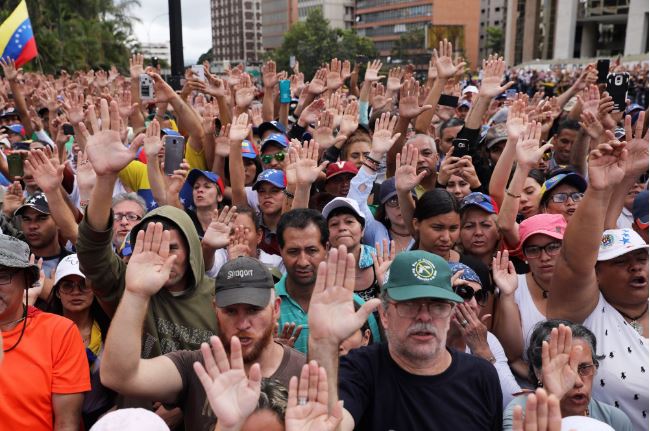 The European Union has demanded the immediate release of journalists detained in Venezuela, as a battle for political power in the country continues to escalate.

“There is a clear call from my side to release immediately your colleagues in Caracas,” the bloc’s foreign policy chief, Federica Mogherini, told journalists in Bucharest on Thursday.

“We firmly believe that all journalists should be able to exercise their duties and responsibilities and rights in the exercise of their work,” she said.

Spanish news agency EFE said late on Wednesday that two Colombians and a Spanish national working for the outlet in Caracas had been arrested.

“We demand the immediate release and respect for their lives,” he added.

Venezuelan Foreign Minister Jorge Arreaza tweeted that some foreign journalists had entered his country “irregularly” and several tried to “access the presidential palace without accreditation.”

“International media and agencies know that in order to avoid unnecessary inconveniences, they must complete the necessary procedures at the consulates, prior to their trip to the country,” Arreaza wrote.

According to EFE, Colombian photographer Leonardo Munoz entered the country “through the appropriate migration channels” on Jan. 24.

“The right to find and share news is a human right that does not know borders,” Venezuela‘s national press union (SNTP) tweeted in response to Arreaza’s comments.

“Any attempt by a government to limit this right … is censorship.”

Arreaza’s tweets followed reports by the Le Figaro daily that French journalists Pierre Caillet and Baptiste des Monstiers were detained on Tuesday when they were filming the presidential palace.

In addition, two Chilean journalists were deported on Wednesday after being detained for 14 hours in Caracas, according to Chilean Foreign Minister Roberto Ampuero.

A political and economic crisis in Venezuela has escalated sharply in recent weeks. Nationwide protests against the rule of President Nicolas Maduro were followed by an outright challenge from Juan Guaido, the 35-year-old speaker of Venezuela‘s opposition-controlled National Assembly.

Guaido declared himself interim president and has received backing from the United States among many other countries.

He told Spanish newspaper El Pais that if Maduro steps down, fresh elections would be held a maximum of 12 months later.

Venezuelans took to the streets again on Wednesday in a fresh round of protests to pressure Maduro to step down and spur the army to allow the entry of humanitarian aid from the United States.

The European Parliament voted on Thursday to recognize Guaido as the rightful interim president of Venezuela and called on EU member states to follow suit.

The vote is purely symbolic, as the parliament does not have a say in foreign policy.

European leaders have given Maduro an eight-day deadline to announce new elections or they say they would formally recognize Guaido as interim president.

British Foreign Secretary Jeremy Hunt told Guaido in a phone call on Wednesday that “he was a courageous and brave man working for a brighter future for the people of Venezuela,” according to a Foreign Office statement.

Russia, which supports Maduro, said on Thursday that it was ready to help mediate between Maduro and the political opposition.