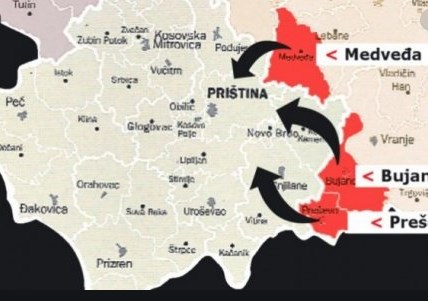 Kosovan President Hashim Thaci, who is moving forward with a plan to exchange territories between Serbia and Kosovo, said that his dream is to add the towns of Presevo, Bujanovac and Medvegja to Kosovo. The three majority ethnic Albanian towns are in Serbia, which is in turning pushing to have several majority Serbian towns and half of the city of Mitrovica moved to Serbia. Kosovo also demands that, as part of this deal that was variously promoted by the European Commission, top US officials and policitians in Belgrad and Pristina, Serbia recognizes its independence.

I dream about having Presevo, Medvegja and Bujanovac included into the territorial integrity of the Republic of Kosovo, Thaci said in a TV debate, before insisting that he is not working on a plan that would result in border changes.

The proposal is strongly criticized by Albin Kurti, the short-lived Kosovan Prime Minister, who was ousted under strong pressure of the Trump administration. Kurti says that his opposition to the border trade deal is the reason he was removed from office, and is currently involved in a dispute with Thaci, claiming that former Albanian guerrillas are targeting his VV party. Thaci was commander of the UCK guerrilla army in the 1999 Kosovo war.

Given its ethnically mixed composition, Macedonia has come out in opposition to this proposal, worried that border changes in Kosovo would inevitably spill over into Macedonia. Adding Presevo and Bujanovac to Kosovo would also influence the main railway and highway link between Macedonia and Serbia.