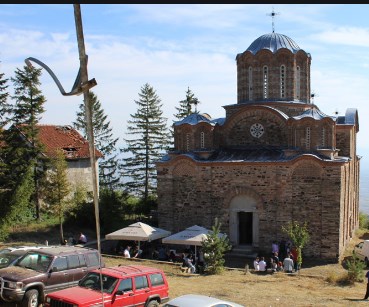 The Culture Ministry plans to protect the Matejce monastery, a 14 century shrine dedicated to the Virgin Mary, which was badly damaged by Albanian terrorists in the 2001 war. Its priceless frescoes were famously desecrated with rude inscriptions and Jasmina Zisovska from the Ministry says that the state of the shrine is not improved much since 2001.

The monastery is protected under law, but after its destruction in 2001 its state gets worse and worse with each passing year. This year the sleeping quarters were burnt down. The new minister Irena Stefoska determined that the monastery will be one of her priorities, said Zisovska.

With its roof damaged and the doors broken, the monastery is left to the elements and the few visitors say that they often find dead animals inside and broken glass.