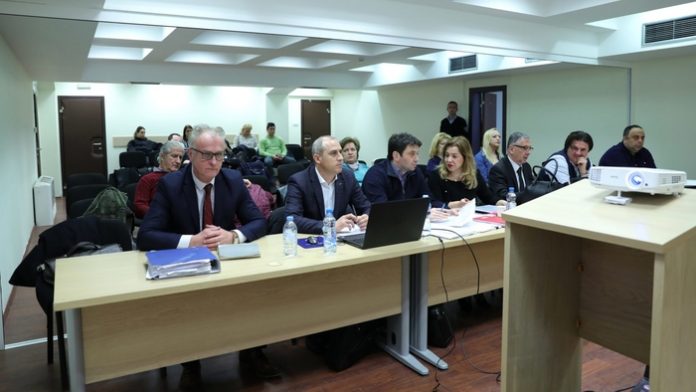 Two jurors whose terms began and ended on the same day received different treatment in the Criminal Court. The juror in the “Durmo Tours” case Slavica Sandovska has been replaced by another juror appointed at the beginning of the trial, Biljana Dimulkova, after Criminal Court President Ivan Dzolev informed the trial chamber headed by Kiro Zdravev and judge in the case Diana Gruevska that Sandovska’s term has expired.

But that does not apply to the juror in the “TNT” case, Liljana Ivanovska-Kocovska, who is required to act as long as the trial chamber extends her term or concludes that it has expired on December 24, reports Sitel. 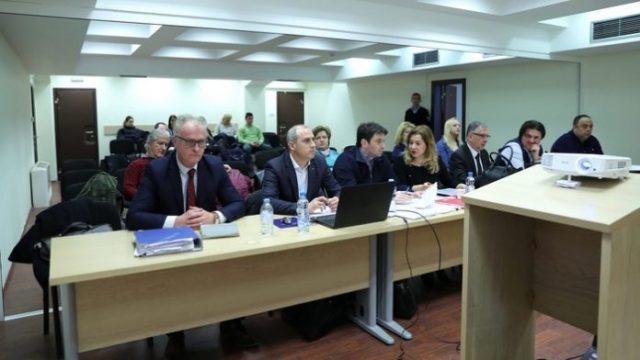 The defense in the “TNT” case demands that the law be respected, while the court says the law on courts makes a difference as to whether extension of term or termination is required for a juror.

Liljana Ivanovska-Kocovska and Slavica Sandovska were elected on the same date, December 24, 2015, with a term of 4 years. Sandovska is no longer part of the “Laskarci” trial chamber, but Kocovska is still required to be a juror in the “TNT” case. 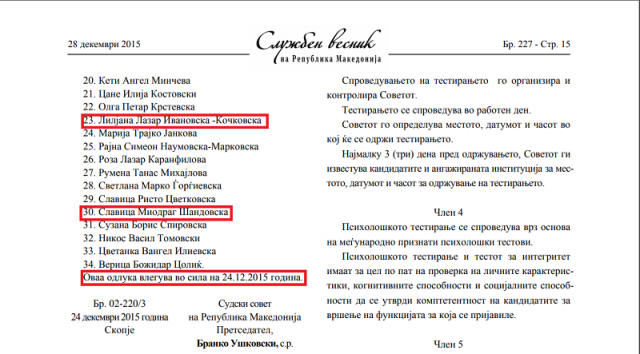 The Criminal Court told Sitel that the Trial Chamber asked Sandovska to state that she no longer has a term to serve as a juror. 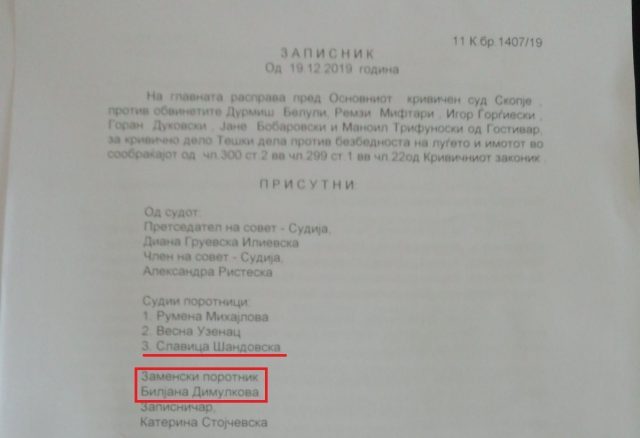 But the question is why this does not apply to the juror in the “TNT” case. The Court told Sitel that Kocovska asked that her term be extended instead of terminated.

Jurors in a leading role: “Torture” and “Erasmus” returned back to the beginning, but not “Laskarci”

After two and a half years, the court process in SPO’s “Torture” case was returned back to the beginning in October last year after a juror in the council resigned. The trial begins from the beginning with the full hearing of all witnesses. The first hearing of the case took place on 28 February 2018.

Today, though, reports come from the Criminal Court that one of the lay judges in the “Erasmus” trial was leaving for Germany in seven days, so the trial will have to start from the beginning. The presiding judge, judge Vladimir Tufegdzic, said that before the start of today’s hearing, which was supposed to have closing arguments, the juror informed them that he had been granted a working visa and was leaving for Germany in seven days. As the trial chamber had ruled that it could not reach a verdict in seven days, it sent a request to the president of the court to appoint a new lay judge.

But that won’t be the case with the “Lascarci” case. In this voluminous case of the bus accident that took place in February last year, the trial judge ruled that he should hire an additional juror at the beginning of the trial, and the Trial Chamber ordered him, for that very purpose, not to delay the hearings and return to the beginning in case of absence or expiry of the term of a lay judge.

The evil spirits of TNT

If we have identified the trials with the victims or the defendants so far, this case is another phenomenon – three TNT people – trial judge Ognen Stavrev, President of the Criminal Court Ivan Dzolev and President of the Judicial Council Kiro Zdravev. And of course, the torn-up juror with an expired term.

Lawyer Jovica Strasevski, lawyer of Gazi Baba ex-mayor Toni Trajkovski indicted in “TNT”, made an extraordinary statement to the public that on the first working day after Christmas, January 8, lay judge Liljana Ivanovska-Kocoska, whose term expired on December 24, submitted her resignation and informed the President of the Basic Criminal Court Ivan Dzolev that she no longer wanted to attend any hearings. Kocoska officially submitted her resignation to the archive of the Basic Criminal Court Skopje, but upon the order of the president of the court, it was rejected and urgently she summoned to meet him in order to pressure her to attend the hearings scheduled, especially in the TNT case.

Lay judge in TNT case with expired term submits her resignation, Dzolev refuses to accept it

Strasevski’s statement was also confirmed by the lawyer of the defendant Mile Janakieski, Elenko Milanov, but the Criminal Court denied it.

While I was in court, Kocoska, the juror, met me and told me she had resigned but her resignation was not accepted, Milanov told Sitel.

The Criminal Court, meanwhile, tried to discredit the defense in the TNT case yesterday with bursting letters. It also threatened with reports to the MoI, the Bar Association and the Prosecutor’s Office.

It denied, among other things, that the juror had resigned and that court president Ivan Dzolev had pressured her and had canceled her resignation. The Criminal Court claims that they offered her protection and then changed her mind to withdraw her resignation. It is not clear what kind of protection this is and whether the case is being processed to the MoI.

It has been widely argued in the public that the importance of the TNT case stems from two clear reasons – political and personal.

The political reasons are defined – pre-election marketing that should satisfy the appetites of the disappointed SDSM membership and supporters, especially those who helped the SDSM come to power with the slogan “no justice no peace”. Top VMRO-DPMNE officials will go to prison.

The personal, on the other hand, are tied to several actors in the process and to a lot of state money that needs to be shared among the stakeholders. The damage to be paid to Fijat Canoski is 40 million euros. He, in turn, should smooth a few places with this money. Some of those actors, who should be take a piece of the expensive cake, are people highly involved in the process.

Zaev through his servants in the judiciary continues to try to do more harm than good, writes political analyst Aleksandar Pandov, adding that SDSM’s rating is dropping.

The analyst has already written about 40,000,000 reasons why “TNT” judge Ognen Stavrev, “is trying to prove to us and practically show us, and the international community what a state with a captured and corrupt judiciary looks like. We all know that Fijat Canovski’s “Cosmos” building was illegally built, and that it was legally completely destroyed. “

And all this, Pandov points out, at a time when the Court of Appeals released all participants in the colored revolution, including those who burned the president’s office and endangered the lives of about 100 people in the apartment block above the office.

We are just three months away from the change of the junta. Anyone who participated in these politically-driven processes will be thoroughly and fundamentally shaken, Pandov said.

Pandov: Anyone who participated in these politically-driven processes will be thoroughly and fundamentally shaken