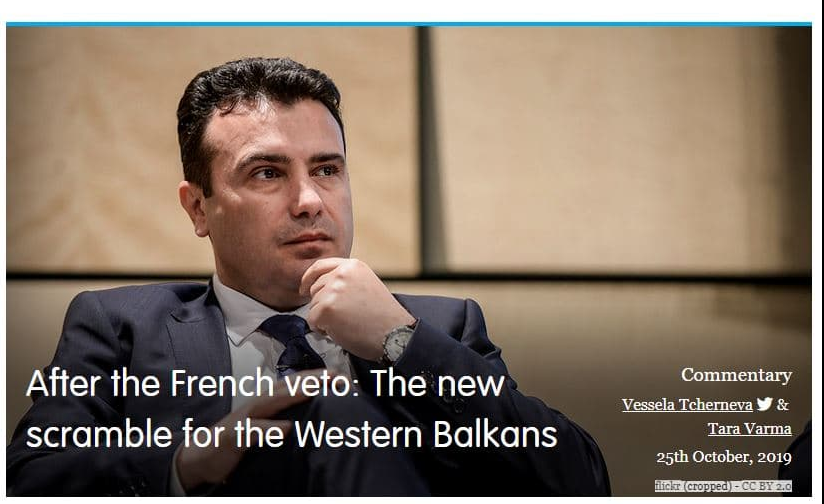 The European Council on Foreign Relations (ECHR), whose board members are dozens of mostly left-wing European politicians, including Radmila Sekerinska, has warned of the danger of a civil war in Macedonia following the failure in Brussels.

An analysis published by the ECHR says that the European Council’s decision not to open negotiations with Macedonia and Albania will spark a new fight for the Balkans that could lead to its division into zones under Albanian and Serbian influence.

A popular saying among observers of the region is that what Slobodan Milosevic failed to achieve through force, Vucic will achieve through peace. With almost no opposition and or free media domestically, the Serbian leadership looks now also geopolitically uncontested externally. All this could lead to a regional rearrangement which leaves little place for the EU, with the region split between Serbia-led and Albania-led spheres of influence. In the absence of a single entity powerful enough to corral the competing forces, this would simply be a logical outcome. For Albania, this could mean the return of the Greater Albania movement, a vision uniting Albanians in Albania in Kosovo, “North” Macedonia, and beyond. And, from the point of view of “North” Macedonia, destabilisation through its Albanian minority is the last thing it would need, ECHR warned in the analysis written by Vessela Tcherneva and Tara Varma.

The analytical center, which was largely founded with George Soros funds, warns that the European Council did not want to reward the “incredible efforts” Macedonia made with the signing of the Prespa Agreement.

Zoran Zaev’s administration, which was banking heavily on the promise of EU accession talks, has now moved to early elections in April 2020. Political battles over symbolism will continue prevailing in the politics of the country, with the opposition VMRO party already attacking the Prespa agreement anew, reads the analysis.

The ECHR recommends the EU to appoint its own envoy to the Balkans, after the United States has already appointed two – Matthew Palmer and Richard Grenell, to prevent intrusions by countries such as Russia and China in the region.

According to the ECHR, French President Emmanuel Macron has announced a rapprochement toward Russia in order to discourage further rapprochement between Russia and China, but according to analysts, this does not mean that France and the EU should leave the Balkans.