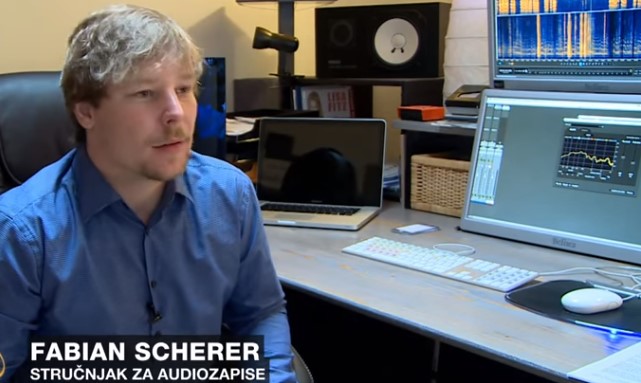 German audio engineering expert Fabian Scherer, who investigated some of the wiretaps that were used to spark the 2015 political crisis in Macedonia, told Pressing TV that it is possible that some of the materials were cut up.

Pressing turned to the German expert after a full length recording of a phone conversation between then Prime Minister Nikola Gruevski and then Interior Minister Gordana Jankuloska threw a completely different light on a brutal 2011 murder which the then opposition SDSM party used for political gain. SDSM portrayed Gruevski and Jankuloska as callous and likely involved in the cover up of the murder of Martin Neskovski, a young man who was killed by a police officer, using a three minute long audio tape. But the full tape, published recently, reveals that both Gruevski and Jankuloska were clearly shocked by the murder and did everything they can to bring the police officer to justice as soon as possible.

We were given a brief audio piece from the Al Jazeera TV station then, I believe it was about three minutes. We checked it four unusual cuts, differences in the background noise, that sort of thing. We did not come up with definite proof that the audio was edited. But, it is possible to forge these things in a way that we can’t find it. In either case, we were almost certain at the time that the piece was authentic, Scherer told Pressing TV.

SDSM widely mocked Gruevski’s assertion that the conversations are chopped up and taken out of context. In this particular case, SDSM used one whole piece of the conversation, and used the laboratory test to prove its authentic, but the scandal is in the omission of the rest of the conversation which throws the entire incident in a very different light. The full tape was revealed by a Chicago based leaker who apparently has access to some of the unedited wiretaps SDSM was using in 2015, and the revelation of the full tape led to accusations against SDSM about their manipulation of public emotions for political gain.