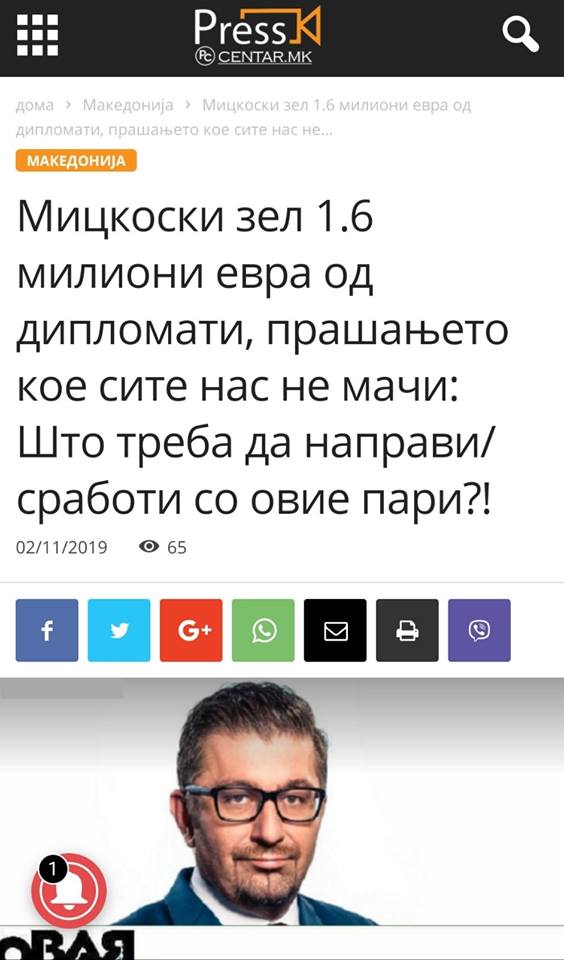 Texts of a corruption scandal involving a Russian interior minister, published on the Russian opposition news portal Novaya Gazeta, have served “the great creators of SDSM truth” as the perfect cover to create fake news about allegedly bribing the Macedonian opposition leader.

1. Moscow-based Novaya Gazeta is an opposition newspaper founded by Mikhail Gorbachev with money from the Nobel Prize. It is anti-government and writes mainly about the affairs of current officials in Russia.

The “bomb” of the SDSM-run news portal is actually a collage of texts, which certainly does not mention Hristijan Mickoski.

2. The correct translation of the text published by Presscentar reads:

The name of Federal Security Service colonel Dmitry Golikov echoed throughout the country in September 2019, when the officer was in Hungary, and 1.6 million euros, 124,000. dollars were found at his friend Atila Boros’ apartment at Dembinski street 10 in Budapest with very serious instructions about H. Mickoski from Macedonia. On the same day, September 19, in another apartment, officially owned by Golikov, 600,000 euros, 20,000 dollars were seized with very serious instructions. It should be noted that the officer left Russia regularly. Information about his trip was highlighted even at the Moscow’s Nikolay district court in April last year, when…

Or as it is was reported by Presscentar.mk: “After the photos and videos released about Mickoski’s meeting with Russian diplomats on the Russian news portal “Novaya Gazeta” there is information that the VMRO-DPMNE leader received 1.6 million euros and 124,000 dollars to perform serious tasks upon instructions. Is this the reason for Mickoski’s secret meeting with Russian diplomats? “

It is obvious that it is a collage composed of another text with inserted data of Mickoski.

3. Mickoski’s meeting at the Russian Embassy was no secret, as the government is trying to portray through quasi-portals and Sase Politico. Interrupted by quasi-journalist Sase Politiko, Mickoski made a statement and soon informed about the meeting on Facebook and the party via press release.

4. The president of VMRO-DPMNE denied the absurd allegations, but his reaction was not published in the SDSM-run news portal.

In his reaction, among other things, Mickoski wrote: And if it weren’t for the fake news that they are creating like this, it would have had to address more crucial issues for the citizens, such as the fact that Zaev plundered the business sector with progressive tax, and now temporarily suspends this harmful measure, they let Neskoski’s killer escape, the suspicion of crime and racketeering, the running from elections and many scandals of this government. And while various advisers to the prime minister have mouths full of demagogy about fake news, they are their main creators in the background. All their quasi-paid public money strategies are without success. They are nervous because they don’t have the support of the people.

Mickoski: Government is in panic over impending defeat, stealing and spreading fake news is probably the only thing it is dedicated to