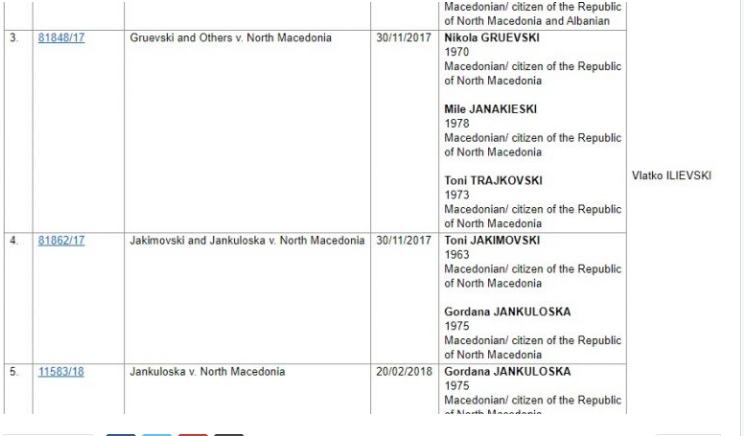 Lawyer Vladimir Ilievski, who is the husband of jailed former Interior Minister Gordana Jankuloska, revealed more details about the suit he has initiated in the name of several victims of political persecution before the European Court of Human Rights in Strasbourg.

Ilievski said that the cases before ECHR have been initiated since late 2017 and that the court has officially called on Macedonian authorities to reach agreement with the plaintiffs by mid December 2020. With this, Ilievski rejected the comment from Justice Minister Bojan Maricic, who acknowledged the cases but said that they are at the early stages of being processed by the court. The cases are based on the wide 2016 amnesty President Ivanov gave to people targeted by the Special Prosecutor’s Office, which, according to ECHR precedents, should still be considered valid.

Given that the first application to the ECHR was submitted in November 2017 by Vladimir Talevski (former Mayor of Bitola sentenced in an SPO case) it can’t be said that the procedure is just beginning. ECHR has been evaluating the facts and the arguments and calls us to reach amicable reconciliation by December 18 2020, Ilievski said in an interview with Plusinfo.

If the two sides fail to reach a mutually acceptable agreement, the court adjudicate the matter. Ilievski represents his wife in several cases in which she is being tried, as well as former Prime Minister Nikola Gruevski, former Transportation Minister Mile Janakieskii and other defendants. Macedonia generally accepts the decision of the European Court of Human Rights, which serves as a court of last instance once the Macedonian Supreme Court has reached a verdict. Jankuloska recently began serving out a four year prison sentence that was upheld by the Supreme Court.

I asked for a meeting with a representative from the bureau that represents the country before the European Court of Human Rights and I hope that the Government will prove my skepticism wrong by their good intentions but the statement from the Justice Minister leaves little room for optimism, Ilievski said about the upcoming process of reconciliation.