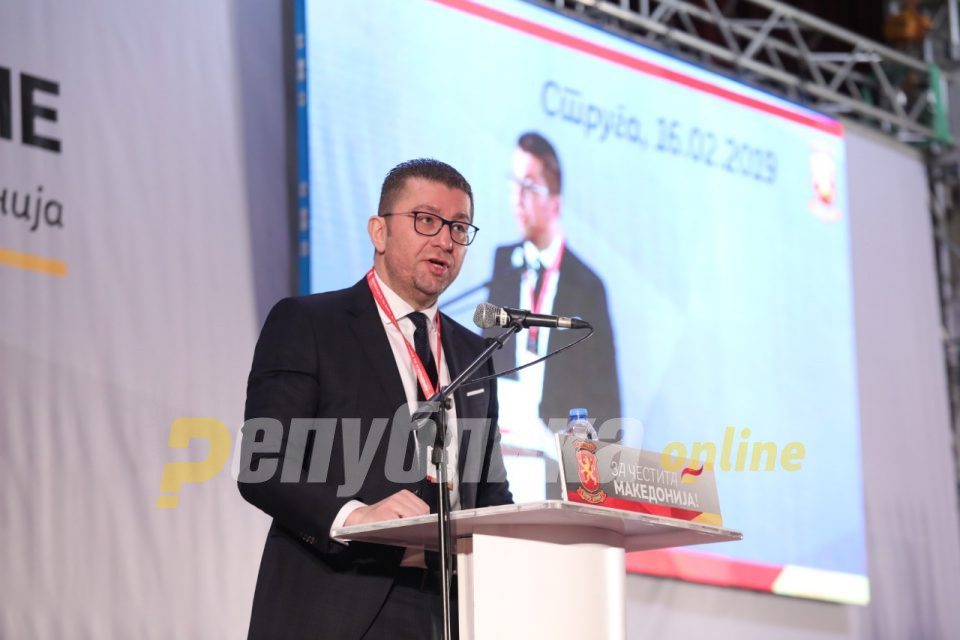 In his address to the 551 delegates at the party’s convention in Struga, VMRO-DPMNE leader Hristijan Mickoski said that with a quality nominee and victory in the presidential election, the party will give the “yellow card” to the Prime Minister Zoran Zaev and SDSM. He calls for great caution because the election may not be regular, and the atmosphere itself, as he said, is not fair. He noted that at the name change referendum in September there were polling stations where ballots boxes were stuffed every two seconds.

This is the day we are electing the future president of Macedonia. The country is at a crossroads, and every citizen has the feeling that he is constantly losing, even though he is doing his best for his life. This is because society is rotten and the value system is ruined. That man thinks everything is against him. I will not give lessons on what has been missed, but I tell you that we will win. What Macedonia was to our great-grandfathers cannot be erased. Here we are to start the final battle for its defense. Let’s choose a person who has never disappointed Macedonia before, to be honorable, righteous and to unite the country with his principles. Each of the delegates in this hall decides and determines what we will offer to the citizens, and I know that you will make the right decision, said Mickoski to the delegates.

A total of 551 delegates choose between the nine candidates who applied for nomination at a party call. The candidates include Gordana Siljanoska Davkova, Vlatko Gjorcev, Filip Petrovski, Goran Angelov, Ilija Dimovski, Saso Kultesovski, Nikita Shekutovski, Vasko Kostov and Gjorgji Manaskov. The candidates will have 15 minutes to present their vision to the delegates before they proceed to vote.