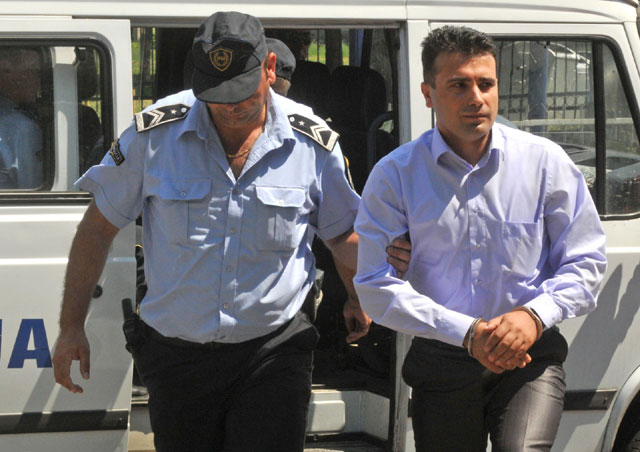 VMRO-DPMNE member of Parliament Antonio Milososki blamed the ruling SDSM party of hastily abandoning its propaganda plans regarding the 2016 pardon law after it realized it might land its party leader Zoran Zaev back in prison.

Both major parties were locked in intense PR campaigns after the Constitutional Court announced it will discuss the 2016 law which curbed the President’s power of pardon. President Ivanov then pardoned five dozen top politicians, prosecutors, police officers and other people who were caught up in the wiretapping crisis. Ivanov insisted that the charges filed along political lines by the now disgraced Special Prosecutor’s Office were being used to blackmail the country’s political elite with the goal of imposing an unfavorable name change to Macedonia. But, under heavy international pressure, the Parliament adopted a law that curbed the President’s right to pardon and allowed an option that recipients of pardons can get the President to revoke his decision, which the pardoned officials later did, also under pressure.

The Constitutional Court is now hearing a challenge to this law, and if the justices decide to overturn it, it would make the requests by the recipients to have their pardons overturned invalid, and in effect, it would bring the pardons back into force. The outgoing Prime Minister Zoran Zaev would again receive a pardon for the wiretapping scandal, as will his security adviser Zoran Verusevski, but the two are in little legal danger from this charge at the moment. Former Prime Minister Nikola Gruevski will also receive pardons for the numerous charges which the Special Prosecutor Katica Janeva directed at him, but he already received political asylum in Hungary. A number Gruevski’s top ministers are still in legal danger in Macedonia, although only one is currently jailed, and for a later charge.

Both major parties fear being tarred by the move from the Constitutional Court before the April 2020 elections. SDSM is quickly moving to charge VMRO-DPMNE of having influence over the judges and getting them to pardon old VMRO officials. VMRO, on the other hand, replies that the Presidency is currently in SDSM’s hands, and that with the numerous criminal and corruption charges revolving around Janeva and likely to hit Zaev as well, he may soon need to use President Pendarovski’s power of pardon. Not to mention that if the law was annulled, this would get a number of former VMRO members of Parliament who have since sided with Zaev on the name change, like former Culture Minister Elizabeta Kanceska Milevska, off the hook as well, and this would repay Zaev’s debt to them.

SDSM made a move to get the Parliament, where they have the majority, to pass a binding clarification or opinion on the law which the ruling party said would force the Constitutional Court in its deliberating to eventually agree that the 2016 curbing of the power of pardon is constitutional. But, this move, after being loudly announced by the ruling majority, was quickly withdrawn from the Parliament. Milososki today offered an explanation why this happened, and it has to do with Zaev’s earlier pardon, from 2008, when then President Branko Crvenkovski pardoned him for a corrupt land deal he approved as Mayor of Strumica.

In their legal illiteracy, the Government of the pardoned criminal Zoran Zaev had the Legal Affairs Committee of the Parliament conclude that ultimately there is no need to get the Parliament to pass a binding clarification of the law. They were supposed to issue a clarification on article 11 of the original, 1993 law, and for a whole week the Justice Ministry insisted that the Parliament must go ahead with this option, and Zaev called on us as the opposition to vote in favor. But eventually they realized that the clarification will completely erase article 11 of the original law, and this is the article under which Zaev received his 2008 pardon. This would’ve meant that his criminal charge in the Global land deal will have to be renewed. SDSM was trapped, and after days of public campaigning against the pardon law, they were now forced to get their members of Parliament to drop the whole thing, Milososki said, visibly amused by this latest twist.

In response, Milososki called on Zaev and his SDSM party to accept VMRO-DPMNE’s position – that all recipients of presidential pardons must withdraw from politics, and to finally put an end to the practice of politically driven pardons and blackmailed politicians.