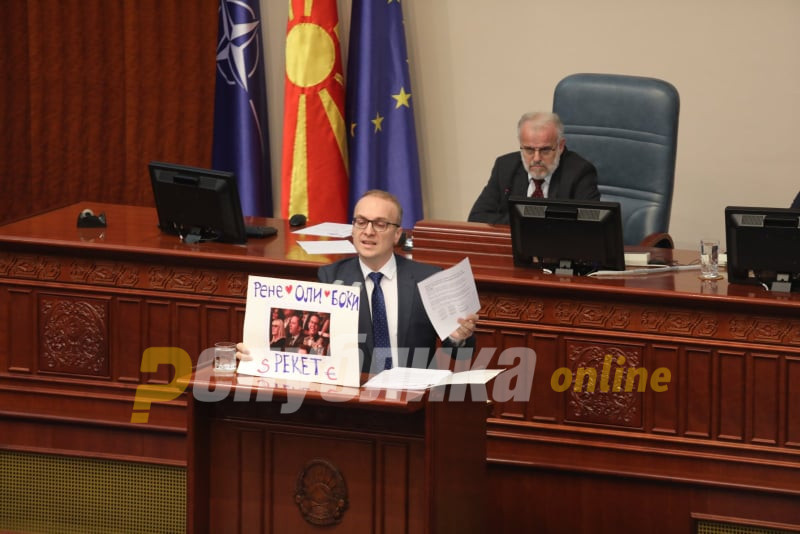 The Parliament made two attempts to discuss the PPO law on state prosecutors today, but both were cut short due to heated arguments between the ruling coalition and the opposition.

The opposition VMRO-DPMNE party accused the ruling SDSM party of pushing a law that would entrench SDSM loyalists as key prosecutors and ensure that Zoran Zaev never faces actual accountability for the many corruption scandals linked to him. Nikola Micevski, who leads the VMRO group in Parliament, put forward a picture of former SDSM Secretary General Aleksandar Kiracovski with Bojan Jovanovski – Boki 13 – the key suspect in the Racket trial, and asked the SDSM members of Parliament to step forward and sign the picture. This prompted Speaker Talat Xhaferi to postpone the session for an hour. 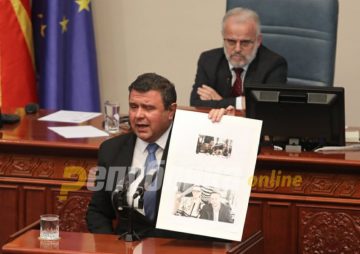 Meanwhile, Justice Minister Renata Deskoska refused to even elaborate the law, asking that the Parliament moves forward with the vote.

After the debate resumed at 13h, Antonio Milososki from VMRO-DPMNE came to the podium with a picture of Deskoska sat next to Boki 13 and the current interim Prime Minister Oliver Spasovski at an even organized by Boki’s 1TV television. While holding the picture, Milososki asked Deskoska if she would continue to support the law, that would ban the future use of wiretaps as evidence, if she knew that there is a recording that reveals how Zoran Zaev is helping a businessman who is in legal trouble get out of jail. Milososki did not play this audio tape, after Speaker Xhaferi asked him not to do it. Earlier this week, Milososki played an audio tape showing that Zaev was closely involved with Boki 13’s actions.

Audio leak proves that Zoran Zaev is behind the Racket scandal

The Parliament had to take another break, after an argument developed between Milososki and Krsto Mukoski, one of the so-called “Gang of eight” of former VMRO-DPMNE members of Parliament who were bribed and blackmailed into voting with Zaev to rename Macedonia. Since this move, the group, whose members faced different criminal charges, has offered its services to Zaev for the PPO law as well.

Milososki reminded Mukoski that SDSM would accuse him of being a “terrorist” and of corruption, but had all the charges against him dropped after he agreed to vote for the imposed name change. Along with two other members of Parliament charged with “terrorism”, Mukoski was released by the court just in time to vote for the name change.

Mukoski responded angrily at Milososki, which prompted another member of the “Gang of eight”, Emilija Aleksandrova, to ask that the Parliament takes a break. Aleksandrova also complained yesterday that her car was keyed in front of the Parliament, apparently by a citizen unhappy with her support for SDSM.

Mickoski: The tape shows who is the head of the criminal octopus