Rasela Mizrahi, the first Jewish person appointed as member of a Macedonian Government, faced a flood of disparaging comments from the left. Given her stellar professional record, there was little of merit that could be used against her, so SDSM party activists resorted to fake news but also anti-Semitic slurs.

Some of the most shocking comments came from Mersiha Smailovic, who is a far left, open borders activists, but also worked in the Labour and Welfare Ministry under Mila Carovska – the same Ministry now placed under the leadership of Rasela Mizrahi. Smailovic shared a fake news report that Mizrahi allegedly placed a VMRO party flag in her new office – a report that was widely spread among left wing media outlets, which used a picture of Mizrahi in a different location, and falsely claimed that it was taken in the Ministry, accusing her of politicizing her role. When commentators pointed out to Smailovic that officials from her SDSM party or from ethnic Albanian parties frequently use ethnic flags, such as the Albanian flag, in their Government offices, Smailovic suggested that Mizrahi places the Israeli flag.

If she used the star of David, there would be no problem, Smailovic wrote.

The shocking that the first Jewish Minister Macedonia has ever had is marked with the star of David comes at a time when the left is plagued with anti-Semitism. This is not the first time Smailovic has faced controversy, the reports that she is considered as an adviser to President Stevo Pendarovski drew scrutiny given her support for opening the European borders, at a time when Macedonia is a key country in controlling the Balkan migrant route. Smailovic is married to an Islamic activist who was arrested for attempting to violate the Gaza blockade.

Another SDSM party activist, Vidana Boskova Micevska, also close to President Pendarovski, had even stronger words for Mizrahi. She likened the new interim Minister to a “Jew who worked for the Nazi occupation in World War Two”. In a rambling social media post, Vidana accused VMRO-DPMNE of using Israel’s help for wiretapping, called Mizrahi an embarassment and a Nazi collaborator.

I don’t mind that Rasela joined a fascist party. I’m sure the Nazis also had Jews who fought for better welfare rights for the Jews, Vidana wrote in one of the ghastly comments aimed at the new interim Labour and Welfare Minister. 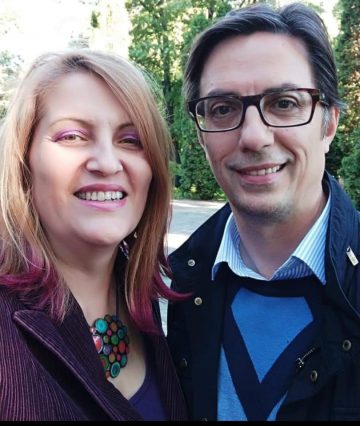 The opposition VMRO-DPMNE party, which nominated Mizrahi to the post, strongly condemned the hate speech aimed at the new interim Minister.

The hate speech and attacks emanating from the SDSM party are representative of the undemocratic rule of Zoran Zaev. The fact that Government officials are peddling in anti-Semitism only proves what an anti-European Government we have at this point, VMRO officials told the Lider news site in a comment.

Macedonia’s centuries old Sephardic Jewish community was nearly entirely wiped out in the Holocaust. The distinguished Mizrahi family is one of the few survivors of this pogrom.